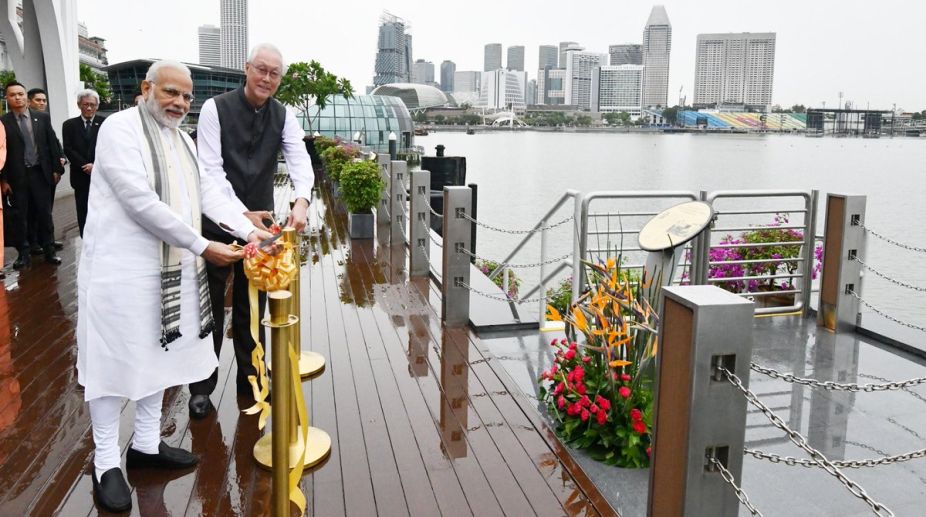 SINGAPORE,  June 2: Prime Minister Narendra Modi and Singapore’s former premier Goh Chok Tong today jointly unveiled a plaque to pay tribute at the immersion site of Mahatma Gandhi’s ashes at the waterfront Clifford pier in the city-state.
Over 250 members of Indian diaspora led by Singapore’s Emeritus Minister Goh Chok Tong joined the ceremony at the pier, 70 years after a part of the Mahatma’s ashes were immeresed in the Singapore water with a plane showering flowers and petals.
Modi, who is here on the last leg of his three-nation tour, unveiled the plaque on the seafront where some of the Mahatma’s ashes were immersed in 1948.
“Emeritus Senior Minister Goh Chok Tong and I unveiled a plaque marking the site where Mahatma Gandhi’s ashes were immersed at the Clifford Pier in Singapore,” Modi tweeted.
“Bapu’s message reverberates globally. His thoughts and ideals motivate us to work for the greater good of humanity,” he said.
Beautiful renditions of ‘Vaishnav Jan To Tene Kahiye’ and ‘Raghupati Raghav Raja Ram’, two favourite bhajans of Mahatma Gandhi, were sung on the occasion.
“Beautiful musical presentation by Singaporean artists on local instruments of ‘Raghupati Raghav Raja Ram’ – another favourite bhajan of Mahatma at Clifford Pier in the presence of Prime Minister Modi,” Ministry of External Affairs Spokesperson Raveesh Kumar said.
After Gandhi’s death in 1948, his ashes were sent to various parts of India and the world, including Singapore, for immersion.
Earlier, Modi met Goh, a veteran leader and an advocate of deeper India-Singapore engagement.
“Had a productive meeting with Emeritus Senior Minister Goh Chok Tong,” Modi tweeted.
Modi and Goh unveiled the plaque at the pier, which is now a heritage landmark in the Fullerton Hotel Complex.
“The unveiling of plaque of the Mahatma is remembrance again of Gandhi as a global figure and his relationship with all his Indian diaspora globally. That is the significance of this event,” said Ameerali Jumabhoy, a 93-year old Singaporean businessman, who leads Gandhi Jayanti celebration in Singapore every year as a leading members of the Global People of Indian Origin.
Following the unveiling of the plaque, Gandhi’s picture carved in gold leaf and framed in table-top were gifted to people who attended today’s ceremony.
Later, Modi visited the National Orchid Garden of Singapore where an orchid was named after him.
He then visited  Singapore’s oldest Hindu temple Sri Mariamman, Chulia mosque in Chinatown and  Buddha Tooth Relic Temple and Museum.
Modi arrived here on Thursday on the last leg of his three-nation visit. (AGENCIES)