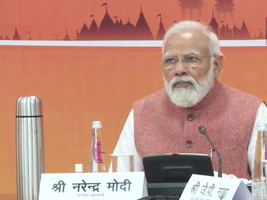 VARANASI, Dec 14: Prime Minister Narendra Modi on Tuesday chaired a meeting with the Chief Ministers of BJP-ruled states in Uttar Pradesh’s Varanasi. This comes a day after PM Modi had chaired a meeting with the BJP Chief Ministers and Deputy chief ministers here yesterday. PM Modi is currently on a two-day visit to his parliamentary constituency Varanasi where he inaugurated phase 1 of the newly-constructed Kashi Vishwanath Dham at a cost of around Rs 339 crores on Monday. Today at around 3:30 pm, PM Modi will attend the 98th-anniversary celebrations of Sadguru Sadafaldeo Vihangam Yog Sansthan at Swarved Mahamandir. The Prime Minister will also participate in a conclave of Chief Ministers of Assam, Arunachal Pradesh, Goa, Gujarat, Haryana, Himachal Pradesh, Karnataka, Madhya Pradesh, Manipur, Tripura, Uttar Pradesh, and Uttarakhand, along with Deputy CMs from Bihar and Nagaland. The conclave will provide an opportunity to share governance-related best practices and is in line with the Prime Minister’s vision of furthering team India’s spirit. Chief Ministers of all BJP-ruled states will give a presentation on good governance, before PM Modi on Tuesday morning. The Chief Ministers and Deputy Chief Ministers will visit Kashi Vishwanath Temple on Tuesday. Chief Ministers of BJP-ruled states are scheduled to visit Ayodhya on December 15 for the darshan of Ram Lalla (Agencies)