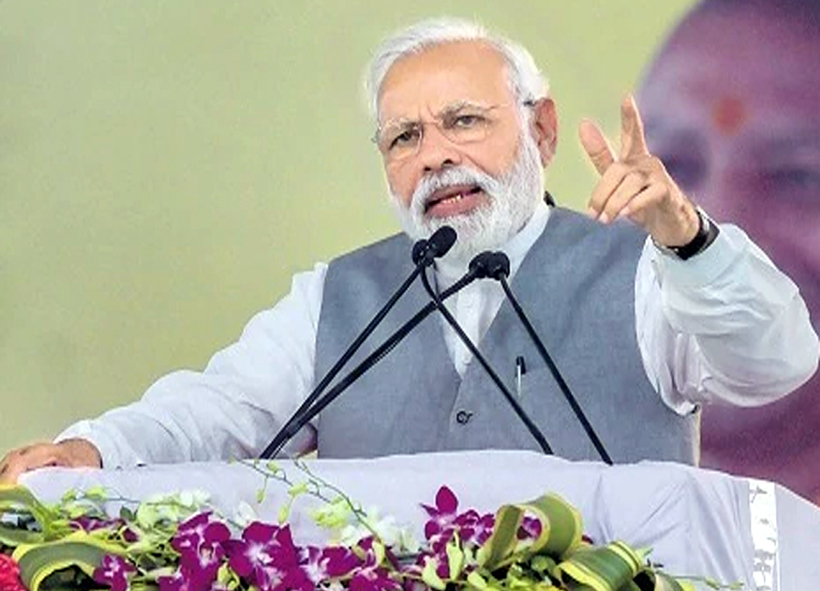 ‘India should have responded after 26/11’

NOIDA (UP), Mar 9: Prime Minister Narendra Modi today again hit out at those seeking proof of India’s air strike at Balakote in Pakistan and slammed the previous Congress Government for its handling of terror attacks like the one in Mumbai in 2008.
Addressing a public meeting in Greater Noida, Modi said the “corrupt” are opposing and abusing him in order to get votes.
Modi said today India works on ‘nayi reeti, nayi neeti’ (new methods, new policies), asserting that after the terror attack in Uri (Jammu and Kashmir) in 2016, the country for the first time taught terrorists a lesson “in a language they understand” with surgical strikes.
“Is it okay for you to have a Government that does nothing? A chowkidar (referring to himself) who sleeps?”, he asked the gathering of thousands, after inaugurating several development projects.
He said the country can never forget the 26/11 terror attack in Mumbai. India should have responded then and the whole world would have supported the country, he said.
“But that required courage. All evidence was against terrorist handlers in Pakistan which proved them guilty. But how did India respond? There are reports that our forces were ready to avenge the terror attack even then, but Delhi remained cold. The forces were not allowed to take any action,” he said.
Stating that there were repeated terror attacks in India after 2008 whose links were found across the border, Modi questioned the previous Government’s response. They did not change their policy, they only changed their Home Ministers, he said.
“Had the previous Government shown some courage and taught terrorists a lesson in their own language, terrorism would not have emerged as the menace it is now,? he said.
He said after the pre-dawn air strike on February 24, India was quietly monitoring the situation and it was Pakistan which started “crying” around 5.00 am that “Modi has hit us”.
“They were thinking they can keep wounding India, wage attacks, proxy wars and India would not respond. The reason the enemies of India could think this was because of the attitude of the ‘remote-controlled’ Govern-ment prior to 2014. That is why the enemies could nurture this attitude,” the prime minster said.
He said some politicians are making controversial statements which elicit applause in Pakistan and urged the people to decide if they want to trust them or not.
“Aaj har bhrasht ko Modi se kasht hai (Today every corrupt person has a problem with Modi). There is a competition among them to abuse this chowkidar (watchman), they think abusing me will get them votes,” Modi said.
Referring to the opposition, he said, “They have turned so hopeless that in their stubbornness to oppose Modi, they have started opposing the nation also.”
“After Uri, proof was sought. Our soldiers did something that has never happened before. Our soldiers struck terrorists inside their home. Terrorists and their guardians had not expected such action (this time),” he said.
“They thought if India once did a surgical strike, they would again do something similar. So they had deployed forces along the border, but we went by air this time,” Modi added.
While addressing a public meeting in Ghaziabad on Friday, the Prime Minister had slammed rivals’ questioning the air strike and said the “trust of 130 crore people” was his proof to them. (PTI)