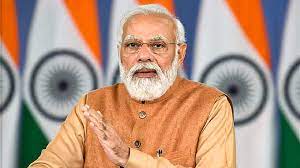 NEW DELHI, Nov 20: Over 250 critical infrastructure projects of different ministries including rail, road and ports have been examined and recommended by the Network Planning Group (NPG), constituted under the PM GatiShakti initiative, since last October, a commerce and industry ministry official said.
On October 13, Prime Minister Narendra Modi launched the GatiShakti – National Master Plan aimed at developing integrated infrastructure to reduce logistic costs.
All logistics and connectivity infrastructure projects, entailing investment of over Rs 500 crore, are routed through the NPG, constituted under the PM GatiShakti initiative.
“Over 250 infrastructure projects have been examined in the last one year by using the National Master Plan and the PM GatiShakti institutional structure. These projects include many connectivity linkages of rail, port, road, and last mile infrastructure projects for sectors such as agriculture, food, steel, and coal,” the official said.
Use of the National Master Plan (NMP) portal is helping the central and state governments cut time and cost of critical infrastructure projects.
Unforeseen disruptions will be reduced now due to use of the portal. Access to the portal is restricted to the government authorities. It is used for identification of critical gaps and planning of projects.
So far, over 26 states have integrated different categories of data with this portal.
The NPG has representations from various connectivity infrastructure ministries/ departments involving their heads of network planning division for unified planning and integration of the proposals.
All these departments approach the NPG first for approval before making a DPR (detailed project report) at the planning stage. After the NPG’s clearance, the project follows the normal procedure of approval by the finance ministry and the Cabinet, depending upon the project.
For example, if the railway is planning a project on a specified route, by putting the relevant information on the PM GatiShakti National Master Plan portal before finalising the DPR, it can see whether the proposed track is crossing through public land or private property or highways.
Citing an example, the official said the availability of various decision-making tools has helped the highways ministry to optimise alignments with lesser clearances requirements.
For instance, interference with Raniganj coal fields was avoided during the Indo-Nepal Border – Haldia expressway planning and two ROBS (railway overbridges) were reduced during the Mandi Dabwali-Panipat corridor planning, the official said.
“A DPR module for the Ministry of Road, Transport and Highways on the NMP platform was a novel initiative to study and modify corridor alignments. The decision-making tool helps in alignment creation, modification, chainage generation, and report generation for any infrastructure project being mapped in the platform,” the official added.
Similarly, using the platform, the Ministry of Railways has been able to plan 126 projects in a year.
“The platform has expedited many projects which had previously stalled in the last one year. For instance, the Taranga hill – Ambaji – Abu Road broad gauge new railway line had stalled for nearly 6 months due to lack of khasra wise data and need for field survey to assess intersections,” the official said.
Over 1,800 layers of data, including that of land, ports, forests and highways, are available on the portal. (PTI)