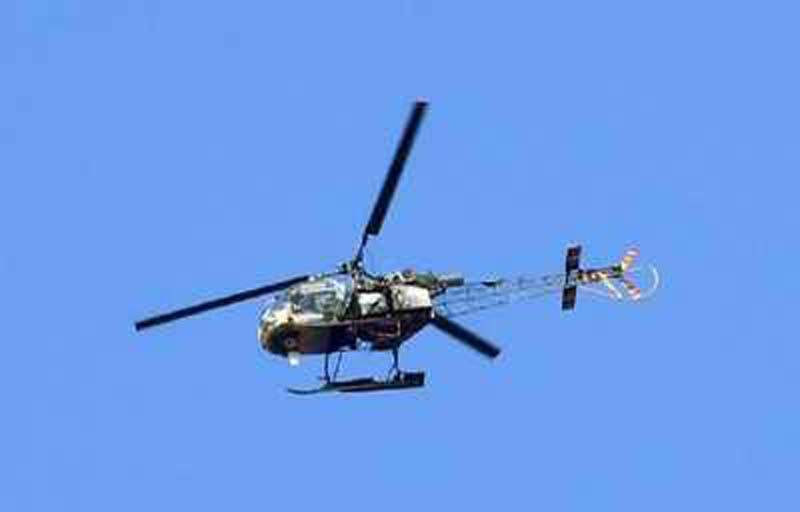 Avtar Bhat
KATHUA, Jan 25: A pilot was killed while the co-pilot was injured seriously after an Advanced Light Helicopter (ALH) Dhruv of the Indian Army made a crash-landing in Lakhanpur area of Kathua district this evening, officials said.
Reports said at around 1850 hours an Army ATTK/ Heptr ALH/WSI of 254 Avn Sqn crashed at Basoli Military Station in Lakhanpur area during routine exercise.
Reportedly the chopper crashed while practicing touchdown landing and rotors likely came in contact with high tension wire in the area.
A senior police officer said the chopper, which was coming from Pathankot, was forced to make a crash-landing in Military Station Basholi in the Lakhanpur belt of the district after coming in contact with HT Wire in the area.
Two pilots of the chopper were injured in the incident, he said, adding that they were rushed to a military base hospital in Pathankot, Punjab.
However, the pilot of the chopper succumbed to his injuries in the hospital later while the co-pilot has been put on ventilator, police said.
The deceased pilot has been identified as Lt Col Rishubh Sharma, 36, of Unit 254 Army AVN while the co-pilot has been identified as Capt Anjani Kumar Singh of Unit: 254 Army AVN IC 80279 P.
The co-pilot has been diagnosed for Polytrouma , severe head injury, multiple fracture, lung contusion left side and was put on ventilator.
A Defence spokesman also confirmed the death of Pilot and serious injury to the co-pilot in the crash landing.
He said the chopper was on routine sortie and there was nothing abnormal. He said it was entangled during the flight which resulted into the crash landing.
However, reliable sources said that the chopper came in contact with high tension wire and with a big bang the power was disrupted in entire area. Later it was entangled in the thick trees. The two pilots jumped from the chopper to save themselves as they apprehended that chopper may catch fire.
But to their ill luck they received serious injuries and were shifted to MH Pathankot for specialised treatment. However, the pilot succumbed to the injuries in the Hospital while the co-pilot is serious.
Sources said the chopper was freed from the trees with the help of a crane later. The Army did not allow any one to enter the area including the media persons. However, SSP Kathua, Shailender Mishra visited the area to have at on spot study of the situation and he was briefed by the Army officers about the crash landing of the chopper, sources added.