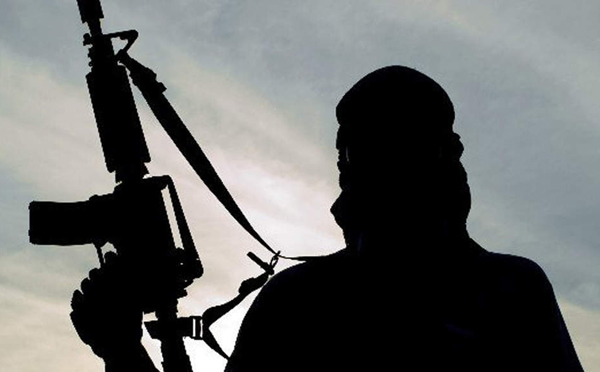 Naikoo, Raees coordinated attacks
‘2 more bids were made on NH to trigger blasts’

JAMMU, Apr 23: In a major success, Jammu Police and Special Operations Group (SOG) have arrested five top militants of Hizbul Mujahideen from South Kashmir and Bathinda in Punjab including a PhD scholar studying in Central University Bathinda and foiled major plot to trigger more car IED blasts on Jammu-Srinagar National Highway and also worked out unsuccessful attempt by the militants to target CRPF convoy at Banihal on March 30.
Arrested militants have made sensational disclosures that they had made two attempts to target security force convoys at Qazigund and Banihal on Jammu-Srinagar National Highway on March 26 and 27 also but didn’t succeed.
Sources told the Excelsior that joint team of Banihal Police and SOG today arrested PhD scholar Hillal Ahmed Mantoo son of Ghulam Rasool, a resident of Chakoora in South Kashmir’s Pulwama district, who was studying in the Central University Bathinda.
Mantoo has been taken on transit remand from local court in Bathinda and is being brought to Jammu for sustained interrogation as he was stated to be the mastermind of failed attempt by the militants to trigger car IED blast near security forces convoy on March 30 and prior to that on March 26 and 27 at Qazigund and Banihal.
Four other militants, who were arrested in South Kashmir have been identified as Waseem Ahmad alias Doctor son of Abdul Nazir Dar, a resident of Chakoora, Pulwama, Umar Shaffi son of Mohammad Shaffi and Aqib Shaffi son of Mohammad Shaffi, both residents of village Behil in Shopian district and Shahid Wani alias Watson son of Kanhama, Shopian.
One of the militants, who was driving the explosive laden car and tried to ram it into the CRPF convoy at Banihal on March 30, was arrested very next day by police when he was trying to escape to the Valley. He has been identified as Owais Amin son of Mohammad Amin Rather R/o Chatta Waran, Shopian.
SP Operations (SOG) Jammu Sandeep Mehta, Additional SP Ramban Sanjay Parihar and SHO Pacca Danga Inspector Karan Chalotra were part of the police and SOG team among others, who made the arrests.
Hizbul Mujahideen divisional commander Rayaz Naikoo and his second-in-command Raees Ahmad Khan had directed the execution of more car IED blasts on the National Highway on the pattern of February 14 Pulwama terror attack. They had assigned the task to Hillal Ahmad Mantoo, who was an expert in fabricating the IEDs.
Mantoo took the help of five other militants, who managed the material used in fabricating the car IED. The car was stolen from New Delhi and driven to South Kashmir. Its Engine and Chassis numbers had been tampered with by the militants before making it a car bomb.
Sources said all five militants were being jointly quizzed by the teams of SOG Jammu and Banihal police to ascertain involvement of more militants in the case. However, so far names of only six militants have surfaced and with today’s arrest of Mantoo, all of them have been captured.
According to police, Owais Amin, who was driving the car, had first tried to target security forces convoy at Qazigund on March 26 but was unable to do so as there were only few vehicles in the convoy. Again, he tried to hit the convoy on March 27 at Banihal but the IED didn’t work.
Amin informed Hillal Ahmad Mantoo, who visited Banihal and rectified the fault. Finally, on March 30, Amin tried to hit the CRPF vehicle at Banihal but detonated the IED few yards away, leading to a massive explosion in which the car was burnt. However, the CRPF personnel in the convoy had very narrow escape in the explosion.
Amin had sustained minor injuries in the blast and was arrested by police the very next day when he was trying to escape to South Kashmir in a tipper.
What was worrisome, according to police, was the disclosure of the militants that Hizbul Mujahideen cadre was in possession of some more stolen cars and material to fabricate car bombs.
It may be mentioned here that the State administration has already imposed restrictions on movement of civilian traffic on Jammu-Srinagar National Highway on Sunday and Wednesday to facilitate hassle free movement of security force convoys.