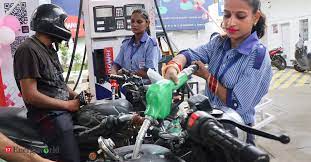 New Delhi, Dec 1: Petrol and diesel sales in India saw a double-digit year-on-year growth in November as increased demand from the agriculture sector helped build on the momentum generated by the festive season, preliminary industry data showed on Thursday.
Petrol sales soared 11.7 per cent to 2.66 million tonnes in November, as compared to 2.38 million tonnes of consumption in the same month last year.
Sales were 10.7 per cent higher than in COVID-marred November 2020 and 16.2 per cent more than in pre-pandemic November 2019.
Month-on-month, the demand was up 1.3 per cent on the high-base festive season created in October.
Diesel, the most used fuel in the country, posted a 27.6 per cent rise in sales in November to 7.32 million tonnes, as compared to the same month last year.
Consumption was up 17.4 per cent over November 2020 and 9.4 per cent higher than pre-COVID 2019.
The fuel has seen a rise in sales month-on-month since September. It rose by a massive 17.1 per cent when compared with 6.25 million tonnes of sales in October 2022.
Petrol and diesel sales were highest since June.
Industry sources said diesel demand has been surging on pick up in the agriculture season. Use of the fuel in irrigation pumps and trucking has helped build the momentum generated from the festive season demand push in October.
Rabi crop sowing led to a pick-up in economic activity and a rise in demand.
Auto fuel sales had dipped in July and August owing to the monsoon and reduced demand.
As the aviation sector opened up, India’s overall passenger traffic at airports inched closer to pre-COVID-19 levels.
Reflecting the trend, jet fuel (ATF) demand jumped 21.5 per cent to 572,200 tonnes during November, when compared to the same month last year. It was 60.8 per cent higher than November 2020 but 13.3 per cent lower than pre-COVID November 2019.
Sources said, while domestic air travel is back to pre-COVID levels, international traffic is lagging because of continued restrictions in some countries.
India’s recovery has continued to gain momentum in recent months but has been accompanied by elevated inflation. This slowed the momentum a bit in July-September.
India’s oil demand has been rising steadily since the easing of COVID-19 restrictions.
Cooking gas LPG sales were up 7.8 per cent year-on-year at 2.55 million tonnes in November. LPG consumption was 8.4 per cent higher than in November 2020 and 13.3 per cent more than in November 2019.
Month-on-month, the demand was up 7.07 per cent when compared to 2.39 million tonnes of LPG consumption during October, the data showed. (PTI)