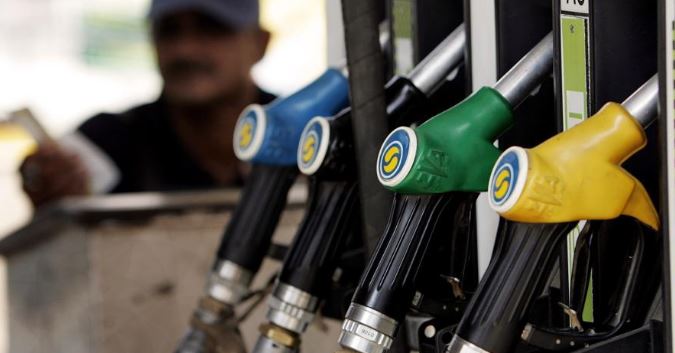 NEW DELHI, Sept 3:
Petrol and diesel prices in the country touched their highest levels today mainly due to dramatic fall in rupee and a sharp rise in crude oil rates.
Petrol price in Delhi rose to a record Rs 79.15 a litre and diesel climbed to a fresh high of Rs 71.15, according to price notification of State-owned fuel retailers.
This follows 31 paise/litre hike in prices on Monday. Rates have breached the previous high of Rs 78.43 a litre hit on May 28. On that day, the rate in Mumbai was Rs 86.24 per litre.
A litre of petrol in Mumbai costs Rs 86.56 on Monday.
Prices in Delhi are the cheapest in all metros and most State capitals due to lower sales tax or VAT.
Diesel rates on Monday were hiked by 39 paise a litre, the steepest increase since the daily revision in prices was introduced in mid-June 2017.
Diesel now costs Rs 75.54 per litre in Mumbai.
Since August 16, petrol prices have risen by over Rs 2 per litre. Diesel prices on the other hand have risen by Rs 2.42 a litre during this period.
Diesel rates had hit Rs 69.31 a litre on May 28, but this record was breached on August 27 and on Monday they hit a fresh high.
Fuel prices vary from State to State due to local levies.
Officials said the spike in rates is on account of exchange rate falling to a record Rs 71 to a dollar, depreciating by Rs 2.5 in a month.
Also, crude oil has gained USD 7 a barrel in a fortnight, driven by fears that the US sanctions on Iran will likely contract supplies.
The appreciation of dollar against rupee has also pushed up rates for compressed natural gas (CNG) as well as piped natural gas (PNG) since the price of gas procured by city distributors is mostly dollar-denominated.
Indraprastha Gas Ltd, which retails gas in the national capital, on Sunday raised the prices of CNG by 63 paise per kg and by Rs 1.11 per standard cubic meter for piped natural gas supplied to households for cooking purposes.
CNG now costs Rs. 42.60 per kg in Delhi and Rs 49.30 per kg in Noida, Greater Noida and Ghaziabad. The consumer price of PNG to the households in Delhi has been increased to Rs 28.25 per scm, while same in Noida, Greater Noida and Ghaziabad would be Rs 30.10 per scm, which has been increased by Rs 1.26 per scm. (PTI)