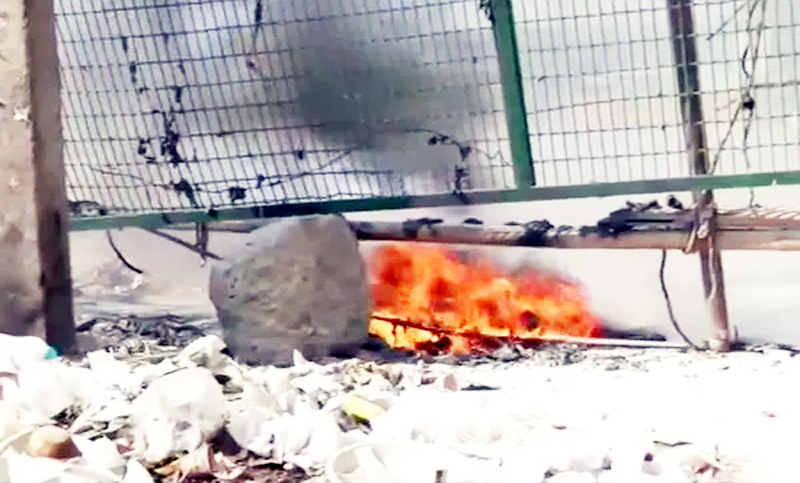 NEW DELHI, Mar 22: An unidentified man allegedly opened fire and hurled a petrol bomb at the empty protest site outside the Jamia Millia Islamia on Sunday, according to officials and students of the university.
The spot was inspected by a team from the Forensic Science Laboratory (FSL) and a case was registered at the Jamia Nagar police station, Deputy Commissioner of Police (Southeast) RP Meena said. “A broken bottle, a lighter and an empty cartridge were found from a spot near the divider of Gate No. 6 of Jamia Millia Islamia,” he added. Multiple teams were formed to trace the accused, the officer said. The Jamia Coordination Committee (JCC), comprising current and former students of the university, had temporarily suspended its sit-in protest against the new citizenship law on Saturday in view of the coronavirus outbreak.
In a statement, the JCC said a miscreant opened fire and hurled a petrol bomb at the protest site at Jamia Square, Gate No. 7 of the university. The statement added that CCTV footage showed the miscreant in the get-up of a delivery boy with a helmet and three bags on his bike, due to which its number plate was not visible.
“Police have taken away the bullet, while pieces of a glass bottle are still there,” it said.
According to a university official, the incident occurred around 9.30 am. “The man came from the Okhla side, probably after committing a similar act at Shaheen Bagh. He hurled a bottle at the tent near Gate No. 7,” he said. The tent was empty since the students had suspended the protest. As the tent did not catch fire, the man allegedly tried to set it ablaze using a lighter and fired a few rounds, the university official said, adding, “We informed the police about the incident and handed over the CCTV footage to them.” (PTI)
He said after the incident, the miscreant fled towards Julena.
A similar incident occurred a few metres away at the Shaheen Bagh protest site, where an unidentified person allegedly hurled a petrol bomb. No one sustained injuries in the incident.
Two unidentified persons had opened fire near one of the gates of the university last month. Before that, a minor had opened fire near the protest site, injuring one person. (PTI)