Excelsior Correspondent
KATHUA, Aug 8:The irate residents of Kathua held a protest demonstration against the district administration and Food Civil Supplies and Consumer Affairs Department (FCS&CAD) for its failure in solving the grievances of poor people in the town and its outskirts.
The protestors led by RJD, president, SK Bhandari raised slogans against the Government and Food Civil Supplies and Consumer Affairs Department. While addressing he alleged that the poor people were not given the free ration issued by Government of India and having less source of income and after becoming idle due to lockdown and other restrictions imposed due to COVID they are unable to purchase the ration on exorbitant rates from market.
He alleged that most of the ration card holders’ names were deleted and new families were not added in the ration cards. Some of the poor people having no ration cards to get free ration are facing tough time to feed themselves. The Website to upgrade the cards is also not working properly and Department was not helping the poor people. He also alleged that the Domicile issuing process is also going on but the poor people were ignored and not entertained for want of documents from patwaris and their report. He said the Revenue Department was not taking care of poor people. He also demanded that Mohalla wise camps be arrange for issuing Domicile certificates to poor families. 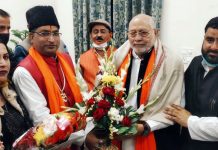