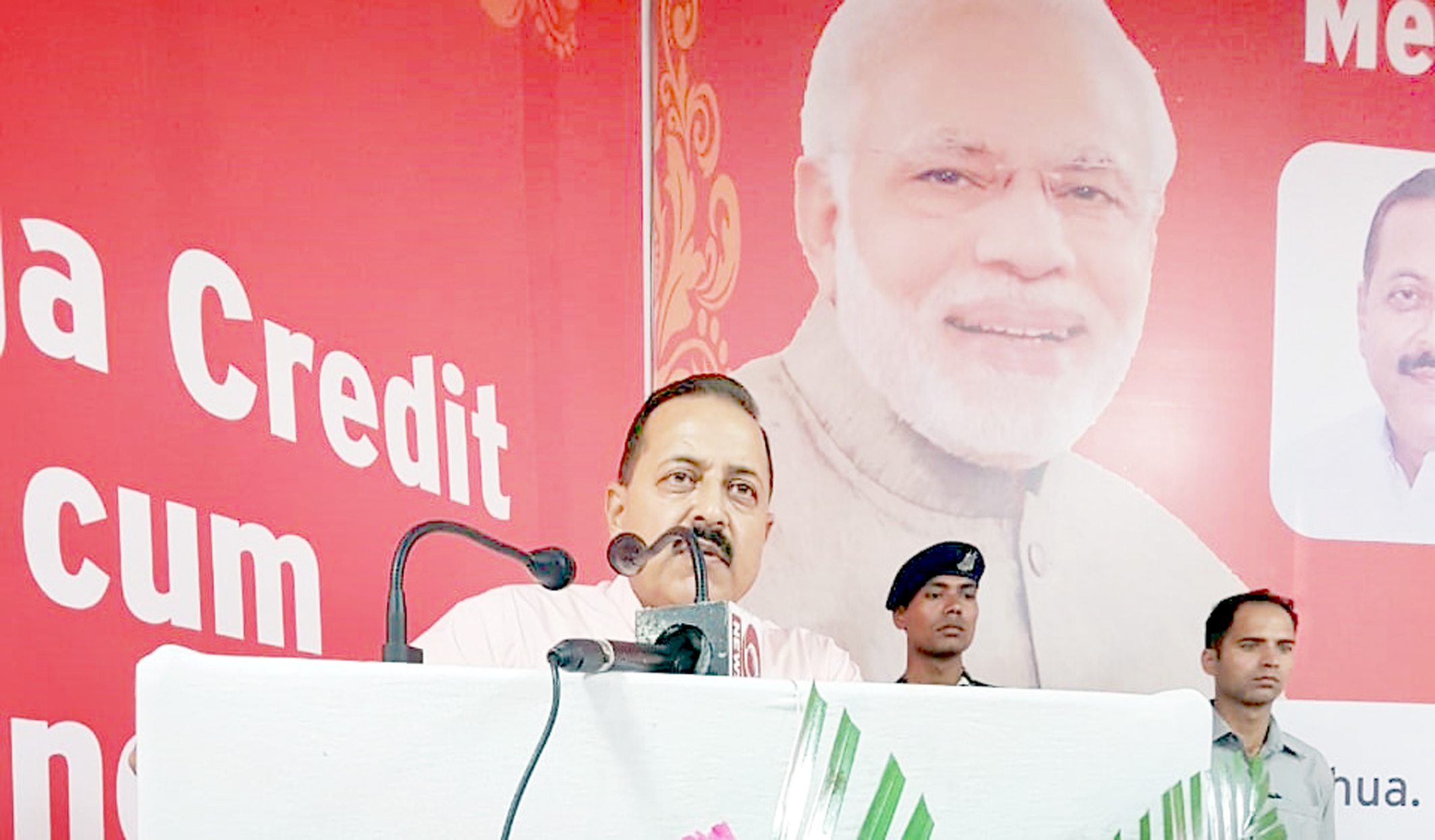 Excelsior Correspondent
KATHUA, June 16: While targeting neighbouring Pakistan for exporting terrorism in Jammu and Kashmir,  Union Minister of State in PMO, Dr Jitendra Singh today said that it will be top priority of the Government to ensure peaceful conduct of Shri Amarnath Yatra.
Talking to media-persons on the sidelines of a function  in connection with ‘Mega Mudra Awareness’ here today, Dr Singh said on extension of ceasefire in Kashmir, officials of Home Ministry  and the concerned Minister may take decision and it is their domain,  but the immediate priority is to ensure peaceful and successful conduct of the upcoming Amarnath Yatra and the responsibility for this is to be shared, not only by the Government alone, but also by the civil society.

Click here to watch video
“All of us need to cooperate with each other for safe and comfortable passage of Yatra and at the same time, we need to exercise  high degree of alertness to pre-empt any mischief to disturb the Yatra,” Dr Singh added.
Responding to a question, the Union Minister said that Pakistan do not want restoration of peace in Jammu and Kashmir. It has been importing  and also exporting  terrorism in Jammu and Kashmir. Some handful of people roped in by Pakistani agencies in Kashmir subscribe to their narrative for their vested interests but a common man irrespective of  its religion subscribes to be part of  New India.  Dr Singh referred to the remarks of  the father of Army soldier, Aurangzeb of Poonch, who is strongly speaking against the acts of Pak sponsored terrorism.
When asked about the killing of  senior journalist in Kashmir,  Dr Singh referred to the series of killings during early 90s when AIR Srinagar chief Lassa Koul, Moulvi Farooq and Sajjad Gani Lone’s father were assassinated. He said Pak sponsored agencies  have caused destruction in the State and they want to keep the part boiling here and continue to disturb peace.
While speaking to the gathering at “Mega Mudra Awareness Camp”, Dr Singh said, he was somewhat disappointed this morning to learn that the registration for the Amarnath Yatra, up till now, was very low compared to last year. He said, Kathua, being the gateway of entry into the State, owes a special responsibility to send out a clear message that the people of Kathua are enthusiastically waiting to welcome the pilgrims from all over the world.
Dr  Singh said, Kathua has, in the last four years, earned several “firsts” and now Kathua is also among the leading districts of the State which has, so far, distributed Mudra loans to the tune of over Rs 131 crore to promote young Start-Ups and entrepreneurship. He called for wider publicity of the Modi Government schemes which are  aimed at generating self-employment and entrepreneurship for youth.
On the occasion, several beneficiaries of the Mudra Scheme were handed over loan documents by the Minister and they also spoke about their experience as  beneficiaries of the scheme.
The members of the Border Union extended gratitude to Dr Singh for initiation of the tendering process to construct bunkers along the International Border. The Minister told them about the decision to construct “Seema Bhavans”, and said, a DPR had already been submitted by DC Kathua for a “Seema Bhavan” near Hiranagar.
Dr Jitendra Singh said, the landmark Keediyan-Garhiyal bridge is nearing completion and the construction of North-India’s first Bio-Tech Park at Gaati near Kathua is also in progress. A seed processing Plant for Kathua has also been approved by Union Ministry of Agriculture, he added.
He regretted that with a little more pro-active approach by the State Government, the first session of Medical College at Kathua could have been started this year. He, however, expressed satisfaction about the  Engineering College at Kathua, which has been functioning for the last two years and which was sanctioned under Centre’s RUSA scheme.
Dr Jitendra Singh also announced setting up of National Highway Hubs from Lakhanpur onwards, which will have a joint complex consisting of petrol pump, toilet area, provision store etc.
He said Shahpur Kandi project has been revived after 40 years and  Ujh Multipupose project has also been pushed forward with the intervention of Centre.
RK Chhibbar, Executive President of JK Bank presented a detailed resume of Mudra related activities. DC, Kathua Rohit Khajuria also spoke on the occasion.
Earlier, Dr Jitendra Singh felicitated two young meritorious girls, Sajal Gupta from Billawar and Chahat Mahajan from Dayalachak, Hiranagar for qualifying the All-India NEET 2018 for admission to MBBS.