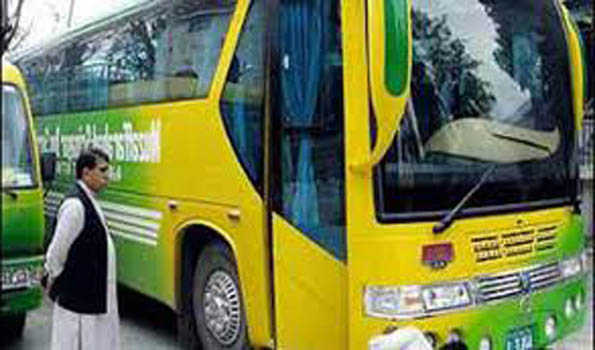 SRINAGAR : The weekly Karvan-e-Aman bus, operating between Srinagar and Muzaffarabad, capital of Pakistan-occupied-Kashmir (POK), remained suspended since March 4 because of tense situation on the Line of Control (LoC) amid reports of attempts being made to push militants into this side.
Meanwhile, Cross-LoC trade between two sides of the LoC also remained suspended since March 4 after it was reported that it (trade) was being used for terror funding, official sources told UNI.
There is no immediate chance of resumption of peace bus and trade service because of tension on the LoC and prevailing situation in the Kashmir valley, where life remained crippled for the 43rd day on Monday due to general strike against scrapping of Articles 370 and 35A.
The bus service was suspended on March 4 after a message was received from PoK side that some repair work was going on Aman Setu bridge, the last Indian military post on this side of the LoC at Uri, about 100 km from here in north Kashmir district of Baramulla.
However, the bus service could not be resumed as no further information was received from PoK, they said.
Residents from both sides, who got struck after the bus service was suspended, were later allowed to cross LoC at Uri, they said.
The bus service, one of the major Confidence Building Measure (CBM) taken by India and Pakistan to allow state subjects from both sides to travel to meet their relatives separated in 1947 due to partition, was started on April 7, 2005. It was also allowed to allow travel on “Travel Permits” instead of International Passport. The service has helped thousands of divided families to meet each other before it was suspended.
However, the bus service was not affected even after Uri and fidayeen attacks by militants and ceasefire violation by Pak troops on LoC and International Border (IB) in Jammu and Kashmir. This is for the first time bus service remained suspended for about one-and-a-half month.
Meanwhile, trade between Srinagar and Muzaffarabad also remained suspended since March 4 after Union Home Ministry said the trade was being used for terror funding. About a dozen Cross-LoC traders were questioned and some of them detained by the National Investigation Agency (NIA) and Enforcement Directorate (ED) and other agencies for their involvement in terror funding.
(AGENCIES)