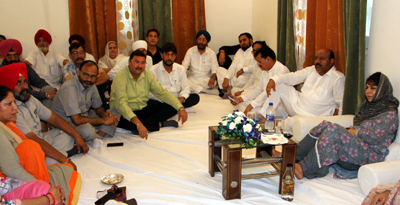 Excelsior Correspondent
JAMMU, Sep 2: People’s Democratic Party (PDP) president, Mehbooba Mufti today said that PDP always respected the Jammu’s mandate and ensured equitable development of all the three regions of the State.
While chairing a meeting of the party functionaries at her residence here this afternoon, the former Chief Minister said that PDP always ensured equitable growth and development of all three regions of the State and strived to take the State towards the new horizons of tranquility and harmony.
Mehbooba stated that the party stitched the common ground with the BJP and formed the Government in the State with a sole motive to respect the mandate accorded by the people of the region to the BJP.
“While being in Government, the PDP left no stone unturned to ensure that all the three regions of the State get equitable growth and development and didn’t allow any wedge between any of the region to take place,” she said.
She added that after the PDP assumed office, it prioritised its efforts to get the State out of the Governance deficit and take up the projects that were needed both in Jammu as well as in Kashmir.
“Jammu as well as  Kashmir valley witnessed a massive development in the sectors of education, rural development, construction of highways, roads and bridges, construction of hostels, colleges, establishment of two Cluster Universities in Jammu and Srinagar, scraping of the stamp duties for women of Jammu and Kashmir and revival of sports in all three regions of the State,” said the PDP president.
“There are measures needed to be taken to make masses aware about the vision PDP has given for the State to restore its identity and foil the attempts that are aimed to tear its secular character apart,” Mehbooba maintained.
Prominent among those present included, Surinder Choudary-MLC, Ved Mahajan Ex-MLC, Daman Bhasin, Falail Singh, Faqeer Chand, Hameed Choudhary, Rasheed Malik, Deeepak Handa, Amrik Singh Reen, Ramesh Koul, Satpal Charak, Narinder Singh Raina, Surinder Singh, Rajinder Manhas, Ramesh Singh Salathia, Vijay Dogra, Surjeet Kaur and others.