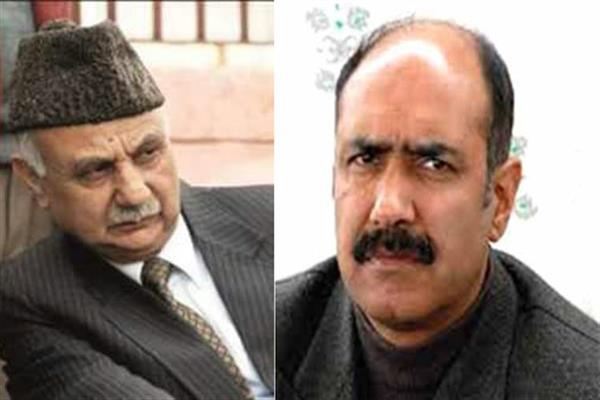 Fayaz Bukhari
SRINAGAR, Dec 18: People’s Democratic Party (PDP) today expelled its two senior leaders, former minister Syed Bashrat Bukhari and Peer Muhammad Hussain from the party’s basic membership as they are joining the National Conference.
The party has also removed Mehboob Iqbal from the post of general secretary.
The decision to expel Bukhari and Hussain was taken after reports suggested that two PDP leaders are mulling to join National Conference (NC) tomorrow.
PDP vice president, Abdul Rehman Veeri said that the party has expelled them from the basic membership of the party on charges of anti-party activities. The party has also removed Mehboob Iqbal, the party general secretary from the post he was holding.
Bukhari, who was working in Radio Kashmir as announcer joined PDP in 2004 and was made president of the Youth wing of the party in the same year. In just one year after joining the party, he was made Member Legislative Council and in 2008 and 2014 he successfully contested elections from Sangrama constituency. He was inducted in the Cabinet by former Chief Minister Mufti Mohammad Sayeed in 2015. The rumors of Bukhari joining the NC were circulating for last two years as he was not happy with the party president Mehbooba Mufti.
Pir Hussain, who was Vice Chairman of Wakf Board, was forced to resign from the post last year by then Chief Minister Mehbooba Mufti after complaints of corruption. He was annoyed with the party since then and was in touch with the NC.
Mehboob Iqbal who was removed from the post of general secretary by the PDP is also likely to join the NC.
Besides this, the PDP leader from Khan Sahib and MLC, Saifudin Bhat alias Shatru, is likely to join NC. He has met former Chief Minister Omar Abdullah and expressed his willingness to join the party.
Earlier, several PDP leaders including former finance minister, Haseeb A Drabu, former Minister Imran Raza Ansari, former MLA Zadibal Abid Ansari and former MLA Tangmarg Mohammad Abbas Wani resigned from the party. Imran joined Peoples Conference headed by Sajjad Lone while others are yet to join any political party.