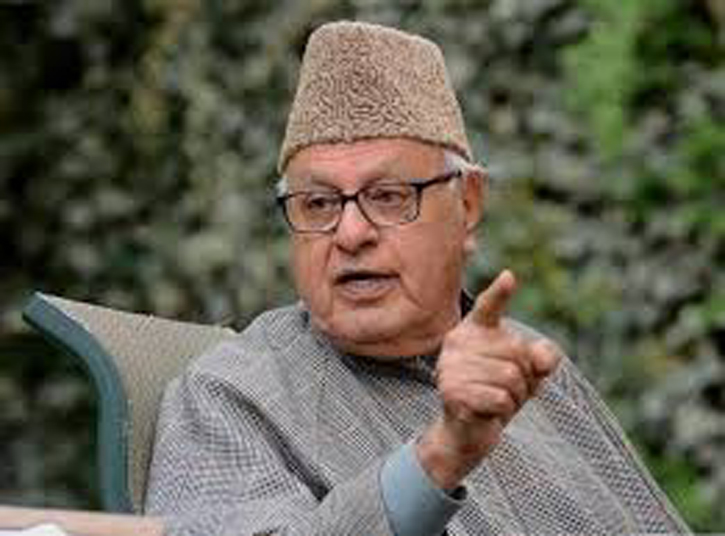 Excelsior Correspondent
Srinagar, Mar 30: National Conference (NC) president Dr Farooq Abdullah today said that People’s Democratic Party (PDP) eroded the fiscal autonomy of the State and declared that his party will fight for the unity and integrity of Jammu and Kashmir.
Addressing a gathering of party functionaries of Srinagar, Abdullah accused PDP of eroding the fiscal autonomy of the State. “No sooner we returned to power, the unrelenting erosion of our special status ceased to end. However, our absence from power corridors of our State gave all the forces, who are inimical to State’s unique character and integrity, a field day to fiddle with our status. What unfolded during past few years during the PDP-BJP rule bears my assertions out, be it implementation of National Food Security Act or GST. What was left of our special status in shape of our fiscal autonomy was eroded by PDP. We have seen it all with our eyes. This should act as an eye opener to all”, he said.
Click here to watch video
The NC president said that the PDP manifesto in 2014 elections was to keep BJP out but it later landed up in the lap of RSS-BJP. “Mufti Sayeed in his last days repented for his colossal mistake but that delayed repentance of his was of no help. His daughter followed her father’s suit and hobnobbed with BJP to keep her flock together. She hunkered down before BJP-RSS for the sake of power and chair. Not to talk of preserving what was left of our autonomy”, he said.
“The countless miseries that were inflicted on Kashmiris in PDP-BJP Government will take years to heal. Now Mehbooba Mufti is again up to the same gimmickry, she masters; this time we should not fall prey to her theatrics,” he said.
The NC president blamed Bakhshi Ghulam Mohammad and Sadiq Mohammad for eroding the special status of Kashmir. “It was in that Constitution, a social document that National Conference was able to achieve a special dispensation for our State. The Delhi agreement streamlined the relation between Srinagar and New Delhi. Nonetheless whatever we were able to achieve was eventually eroded by the successive Governments of the State led by Bakshi and Sadiq. They had to implement the agenda of New Delhi because they drew their sustenance from them. They were bound to do so, being at their beck and call, they had no other choice.”
Abdullah while reacting to Union Finance Minister, Arun Jaitley’ statement on Article 35 A said that BJP is hell bent upon degrading Constitutional status of the State. “Art-370, Art-35 A sanctify the Constitutional link between New Delhi and the J&K State. They are hell bent to degrade our Constitutional status; this assertion of his reveals their anti Kashmir agenda. Kashmiris have lent immense sacrifices to throw the autocratic yolk away from State. We have never allowed anybody to enslave us; we will never give up on that predilection of ours. We will fight for the unity and integrity of our State at any cost”, he added.
He said that the flag of its party symbolizes the sacrifices of many who gave their lives to end the ill fortune Kashmiris faced for centuries. He added that there are forces in the country who are hell bent upon tarnishing the secular image of the country. “However there are forces who are disposed to tarnish the very secular visage of India. The agenda of BJP-RSS is all exclusive; they have all along shown consternation for the secular and progressive ideals of the Constitution of India”, he said.
While referring to the mushrooming of parties mostly one man armies in every nook and corner of the State, Abdullah said: “My father Sher-e-Kashmir foretold about such mushrooming of leaders in every alley of Kashmir after his death. People who were seeking freedom until the recent past are now sitting in BJP-RSS. Today they are hobnobbing with them but time will come when they will also suffer at hands of their masters.”
“PM Modi had promised to deliver on various issues concerning the nation during his 2014 election campaign but he has aggravated the problems to an extent that will take decades to solve. Modi Government presents a tale of failures and misgovernment. People have now made it a point to give befitting reply to Modi for his failures and lies”, he said.
“Having been failed to deliver on key issues that the country is facing, the Modi led BJP Government would create a war like situation in the country to subvert the attention of people from the real issues affecting poor and middle class; farmers and labor class,” he said.
Abdullah said: “Today it is an opportune movement to clean the country and the State from the communal yolk. India is a vast country and our fight is with the communal forces. This time you have to cast vote for securing India’s secular visage, and in particular the very identity and integrity of our State.”
Party general secretary Haji Ali Mohammad Sagar while addressing the convention said: “This time the situation is like that of 1977. It is NC pitched against all the forces as are inimical to our special status. In the forthcoming elections we should make it a point to trounce all those forces who are hell bent upon to destroy our unique Constitutional position.”