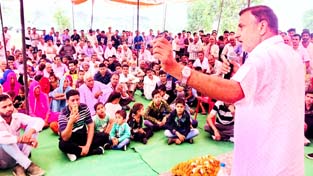 Excelsior Correspondent
JAMMU, Apr 8: Expressing serious concern over scarcity of essential commodities, grim power and water supply besides poor performance in all the sectors, senior Congress leader and former minister Sham Lal Sharma has alleged that present PDP-BJP regime has proved non-performing liability for the people of the State who voted them to power.
He said  the administration must come out of deep slumber and infuse responsiveness and an element of accountability in its machinery in order to mitigate the sufferings of people.
Addressing meeting of  Block Congress Committee at Chowki Choura in Akhnoor today, Sharma alleged that the present Coalition Govt in the State has failed on all fronts. The people of Jammu are experiencing difficulties due to the shortage of electricity, erratic water supply and scarcity of ration at the ration depots. He said the authorities are not paying any attention to these burning problems of the common man.
Congress leader further said that the farmers of Kandi area had already asked the present Govt to release the water in the canal in view of less rainfall in the region. Despite their genuine demand for water required for irrigation of crops, this Govt didn’t pay any attention as a result the area is facing drought like situation. He said that Chowki Choura area of Akhnoor being Kandi,  is dependent on  rains. Due to inadequate  rains, inhabitants weren’t able to do farming and facing drought like situation. There is scarcity of feed and fodder for the animals.  He demanded free ration and feed for the farmers of the area.
Sham Lal said that the present Govt has virtually failed in all spheres. Even the people have to struggle hard to get basic amenities as the Govt is not paying any attention. He said that the development works have come to standstill, even the works undertaken by previous Govt   haven’t yet been completed . The condition of roads have become very bad and there are potholes on the roads which effect the smooth connectivity to various areas.
Launching scathing attack on BJP Govt, Sham Lal said that the shortage of ration in Jammu region speaks about the insensitivity and callousness of the authorities. He said there is shortage of ration especially rice, sugar and flour in Govt/ private depots all across the region.     Lambasting coalition parties in general and BJP in particular, Sham said that BJP has betrayed people of Jammu region as nothing has been done to solve their day to day problems.