Excelsior Correspondent
SRINAGAR, Sept 28: Casual Labourers of Power Development Department (PDD) today demanded that their salaries that have been withheld from May this year should be released without any further delay.

Click here to watch video
Scores of such workers reached the Press Enclave and stage protest against the department saying that they are being met with injustice.
“We were engaged in the year 2015 after our family members met with any sort of accident, however, we are being subjected injustice,” said Muhammad Yaseen from circle Sopore of PDD.
They said that due to the non-payment of salary, they are facing a lot of problems and the COVID-19 is taking a toll on them.
The workers appealed the higher-ups to look into the matter and make sure that their salaries that are pending for long now are released. 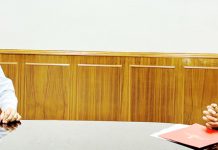