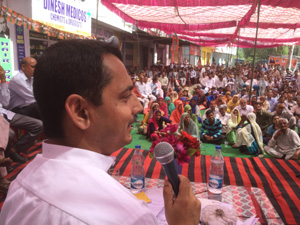 MAJALTA, Apr 9: While addressing a public meeting at Khoon after kick starting macadamization work from main road to Aapshambhu Mandir Khoon, which shall provide a viable road connectivity to the SC Basti living in the area too, MLA Ramnagar Ranbir Singh Pathania delineated his focus on improving the lot of SC/ST/marginalized sections of the society.
The MLA said it was during his tenure that road projects connecting the hitherto neglected areas of Basantgarh, Pachound, Khaned, Loudhra, Ponara, Raichak, Kadwah, Siyamehri, Chigla-Balota, Thattin-Pathwar, Parla Chakal, Rajundi, Nokain, Lehar, Naoul, Rangar, Maryal and many habitations have been kick started and are going on in full swing. He also said that work on three 100-bedded girls hostels and one SC and another ST hostel are going on in full swing with a view to spurring up educational activities amongst the marginalized sections/women folk of the society. He also announced a slew of initiatives and funds which shall be spent under SCA to Schedule Caste Plan and SCA to Tribal Sub Plan in the area of Ramnagar with a view to improving road connectivity, electricity and drinking water facilities of SC and ST people.
The MLA further dwelled in detail the various developmental initiatives he has taken for SC and ST habitations of the area of Ramnagar. He further charged that in last few decades selective development has been resorted to in the area of Ramnagar with SCs and STs lagging far behind. “And with ‘Sabka Saath and Sabka Vikas’ as the national clarion call of our  party, my  endeavor has been to take the neglected and deprived sections/areas along with in the developmental journey of Ramnagar,” he said.
Pathania  also called upon the party cadres as well as Panchs ,Sarpanchs and local leaders belonging to SC/ST community to avail of various schemes and programmes as have been initiated for the welfare and well being of SC/ST people. He also announced that work on tribal modal village at Rasli- Gadheran shall commence very soon with a developmental initiatives of as many as 10 crores.