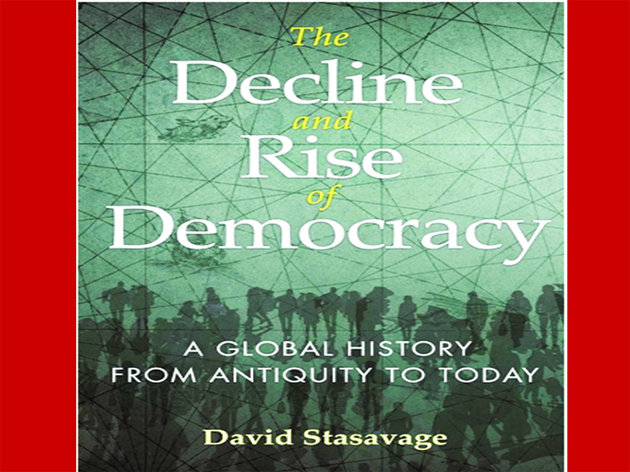 Ansh Chowdhari
Book: The Decline and Rise of Democracy
Author: David Stasavage
Publisher: Princeton University Press
By virtue of his ostentatious research base and incisive analyses, this book by David Stasavage appears as a coherent tome analysing the evolution of democracy across the globe over the millennia in a manner, that, on one hand, remains anchored in a normative foundational theory while on the other draws its legitimacy from structured empirical data drawn from a gamut of resources. His quest for finding the origins of democratic thought has led him to undertake expansive and value-laden research, the result of which has been absolutely phenomenal.
The book is divided into three major parts having four chapters in each section. This treatise has been basically written to enshrine and strengthen the normative goals espoused by democratic thought, but at the same time, it also challenges certain ingrained, and in certain cases, fictitious positions that associate democracy and its development with modernity and western values. That’s why he says that “If early democracy arose independently in many human societies, modern democracy is a more specifically European invention. Early democracy was a form of rule that proved durable over thousands of years. Modern democracy is something much more recent, and we should think of it as an ongoing experiment.”
The author, in this process has evaluated the rise of early democracy across the globe and a fundamental tenet that ironically keeps on repeating is the fact that primitive technology, tribalism, and lack of intensive agriculture promoted, unlike what we generally think, democratic thoughts across the world.
The author in the first section maintains that early democracy’s rise, inter alia, was chiefly dependent on the aforementioned causative agents, yet it wasn’t limited to any particular area or continent. By using Standard Cross-Cultural Sample, he has illustrated that “Early democracy was widespread in human societies” viz in Athens, the Mesopotamian kingdom of Mari, Ancient India, Huron of America, Mesoamerican Republic of Tlaxcala, Central Africa, Third dynasty of Ur. He masterfully juxtaposes these societies with early autocracies which were present in the Incas, Aztec Triple Alliance, Mississippian areas, The Azande of central Africa which make him draw an inference that “the early democracy was more likely to survive in small scale settings, in the absence of strong state bureaucracies, and finally in the absence of many technological developments that we commonly associate with civilization”.
The second section of the book expressly states that an inherent weakness of rulers in medieval Europe created a system which favoured and forced, so to say, the rulers to include the people into the decision-making processes. The ‘ideal despotic distribution’, lack of intensive agriculture, lower taxes and technological backwardness favoured governance through consent and negotiations. The Anglo-Saxon exception is explicit, for it was a bit more systematised due to the presence of witans and witangemot based upon the precept of Quod omnes tangit and on the other, it had the presence of communal movements that asked for autonomous assemblies for autonomous towns.
On the other side, this section elaborates why China and the Arab states could never have the same democracy which Western Europe was striving to achieve in the same time period. The difference, chiefly, as per the author, was the presence of strong bureaucratic states and technological innovations . For instance, the Umayyad and Abbasid caliphs were governing over an area they had inherited in which a strong centralizing tendency was already present due to unforgiving desert geography and certain technological developments whilst China’s strong bureaucratic state structure disallowed the need for any association with the plebians and this favoured production, conscription and rule-based merit system that established and legitimized the writ of the state.
The final part of The Decline and Rise of Democracy focuses on the transition of early to modern democracy. In the chapter titled ‘Why England was different’, Stasavage’s narrative vividly illustrates how democracy flourished in English land. The successful trial of plena potestas, owing to England’s geography and, consequent disappearance of mandates gave rise to an incipient form of representative democracy, which ultimately begot a system of Parliamentary supremacy by the 18th century. He states how this version of democracy differed from its counterpart in America which built a vigorous democracy based on wide political participation, although with limited suffrage and voting rights. He says that “While Great Britain led the way by establishing a new form of representative government, it was Americans who developed something closer to modern democracy”. The land abundance, labour scarcity (borrowed from Evsey Domar’s work) easy exit options, and a modicum of state power made consensual government a necessity in the American context. The remainder of the section records the spread of modern democracy from the United States into Europe and beyond like in India and also evaluates, though in minimal terms, the absence of such democracy in Russia and China. As far as India is concerned, he says that “it sounds as if India’s long history of collective governance made it fertile terrain for the transition to modern democracy”
The final chapter assesses the current state of modern democracy. He analyses the rising discontent and distrust among the citizens of modern democracies. By borrowing from certain political theorists, he has emphasized bridging this ‘democratic deficit’ by ‘continuous investments in the principle of ‘subsidiarity’. He’s also concerned with the rising executive power and the threat of majoritarian electoral democracies to the global order.
So, it can be said that this book, though largely political is a wonderfully crafted interdisciplinary treat, for the author has ventured into historical, sociological, anthropological as well as environmental data to back up his arguments, which otherwise is a rarity in this discipline. The book makes us realize the importance of democracies, their resilience, and their faltering too. It’s a valuable tool for not only political scientists and scholars but for every curious reader who wants to understand this normative idea of governance that is supposedly the ‘best practicable form of governance across the world’.