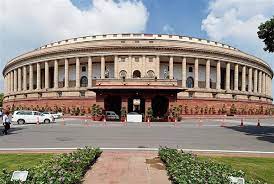 NEW DELHI, July 19:
Opposition parties protested in both Houses of Parliament today to press for urgent discussions on issues like price rise, GST and the Agnipath scheme, disrupting proceedings for the second consecutive day of the Monsoon session.
Click here to watch video
Outside Parliament, the Government and the opposition accused each other of running away from debate on critical issues facing the country.
Congress MP Jairam Ramesh alleged that the Government was acting “stubborn”, but Minister of State for Parliamentary Affairs V Muraleedharan hit back, saying opposition parties were creating a “ruckus” as do not want any meaningful debate in Parliament and only wish to blame the Government outside the House.
Congress leader Rahul Gandhi attacked the Government over the issues of price rise, hike in GST rates and depreciating value of the rupee and alleged that it is “unparliamentary” on the part of the Prime Minister to not answer questions and “run away from a discussion” in Parliament.
Though the two Houses could not transact any significant business, External Affairs Minister S Jaishankar moved the Weapons of Mass Destruction and their Delivery Systems (Prohibition of Unlawful Activities) Amendment Bill, 2022, amid the din.
The Minister said there is a need to amend the WMD Act, 2005 to enact legal provisions relating to the financing of proliferation of weapons of mass destruction and their delivery systems.
As soon as Lok Sabha assembled at 11 am, opposition members belonging to the Congress, Trinamool Congress (TMC), DMK and others gathered in the well of the House with placards against the imposition of the GST on some new items and raised slogans against the Modi Government over the issue of price rise.
The placards read “Gabbar Singh Strikes Again” among others. The opposition has been calling GST the “Gabbar Singh Tax”, alleging that it has been a cruel blow to traders and consumers alike.
Speaker Om Birla appealed to the opposition members to return to their seats and said carrying placards inside the House was against Parliamentary rules.
“You carry rules book but don’t follow rules. The rules prohibit carrying placards here but you are carrying them. You raise farmers’ issues outside the House but not inside.
“You raise the issue of price rise outside the House but not inside. In the last session, you did not participate in the debate on price rise. This is not good,” Birla said.
As the opposition members did not pay any heed to the Speaker’s appeal, he adjourned the House till 2 pm after about 15 minutes of proceedings.
As soon as the House reassembled at 2 pm, opposition members again trooped into the well.
After papers were laid on the table by the members, Kirit Premjibhai Solanki, who was on the chair adjourned the House for the day.
In Rajya Sabha also, opposition parties, including the Congress, the Left and AAP, disrupted proceedings demanding discussions on issues ranging from price rise to the Agnipath scheme.
The House witnessed vociferous protests from opposition MPs as it met in the morning, forcing the Chair to adjourn proceedings till 1400 hrs. Chairman M Venkaiah Naidu rejected notices given by Leader of the Opposition Mallikarjun Kharge and other leaders under rule 267 that calls for setting aside the business of the day to take up the issues listed by them.
“I am not admitting them,” Naidu said soon after the listed papers were laid on the table.
But, opposition members insisted on a discussion on the issues.
“On price rise and other issues, we can have a discussion. On that I have no problem,” Naidu said, indicating a willingness to take up a debate on the issue at a later date under a different rule.
But this did not pacify the opposition members who renewed their protest, forcing him to adjourn proceedings,
When the House re-assembled, Deputy Chairman Harivansh asked Jaishankar to move The Weapons of Mass Destruction and their Delivery Systems (Prohibition of Unlawful Activities) Amendment Bill.
The Chair then adjourned the proceedings till Wednesday morning.
“Oppn agenda – Create ruckus, Shout slogans inside Parliament & disrupt legislative business. Step Out – blame GoI
“It does not want any meaningful debate & has no concern for people. Govt ready to debate all issues provided Oppn has the patience to sit in the house (sic),” Minister of State for Parliamentary Affairs Muraleedharan tweeted.
He was responding to a tweet by Jairam Ramesh.
“Opposition led by the Congress again demanded urgent debate on price and increase in GST on essential food items. Debate denied. Rajya Sabha adjourned for the day. Why is the Modi Sarkar so stubborn?” the Congress MP said on Twitter. (PTI)