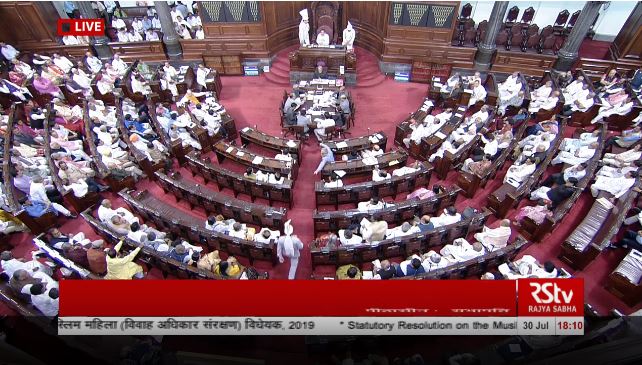 Shah says Muslims have nothing to fear

NEW DELHI, Dec 11: Rajya Sabha today passed the contentious Citizenship (Amendment) Bill, completing the legislative process for giving Indian citizenship to non-Muslim migrants from Pakistan, Afghanistan and Bangladesh, with Home Minister Amit Shah asserting that Indian Muslims have nothing to fear as they will not be affected by the law.
The Opposition termed the bill, which was passed by Lok Sabha on Monday, as “unconstitutional”, “divisive” and “an assault on the democratic and secular fabric of the nation”.

Govt has no data on minorities: Azad
Leader of Opposition in Rajya Sabha Ghulam Nabi Azad asked today why the Citizenship (Amendment) Bill does not include Hindus from Sri Lanka and Christians from Bhutan, as he alleged that the Government has no data on persecuted minorities in neighbouring countries.
Intervening in the debate on the Citizenship (Amendment Bill), 2019 in the Upper House, the senior Congress leader also asked that if the entire country was happy with the proposed legislation, why protests were taking place in Assam, Tripura, Arunachal Pradesh, Meghalaya and Nagaland.

“Honourable Home Ministerji, you brought demonetisation, GST, (legislation on) tripple talaq, NRC, Article 370 (related law) and Citizenship (Amendment) Bill in the same pattern. You bring such bills every four or six months to divert the attention of people from unemployment, problems of farmers, poverty….,” Azad said.
The former Union Minister also stressed that Muslims too were persecuted in Afghanistan. Muslim women have been persecuted a lot in Afghanistan, he added.
Claiming that lakhs and crores of minorities in Pakistan, Bangladesh and Afghanistan have faced religious persecution, Azad took a jibe at Home Minister Amit Shah by saying that the Government does not have any authentic data on such people and was befooling the public.
Countering the charges, BJP member Subramanian Swamy said in Pakistan, Bangladesh and Afghanistan, Hindus, Christians, Buddhists etc have been singled out for ill-treatment and persecution.
“As far as Ahmadiyas and Shias are concerned, they would any day prefer going to Iran, which is a Shia country, or Bahrain, where Ahmadiyas are accepted as Muslims…so they cannot come into this category.. I don’t think a Pakistani Muslim wants to leave and come to our country. So there is no need to include them also…,” he said.
He added that Sri lankan Tamilians did not come to India because of religious persecution but because there was a full-fledged war. (PTI)