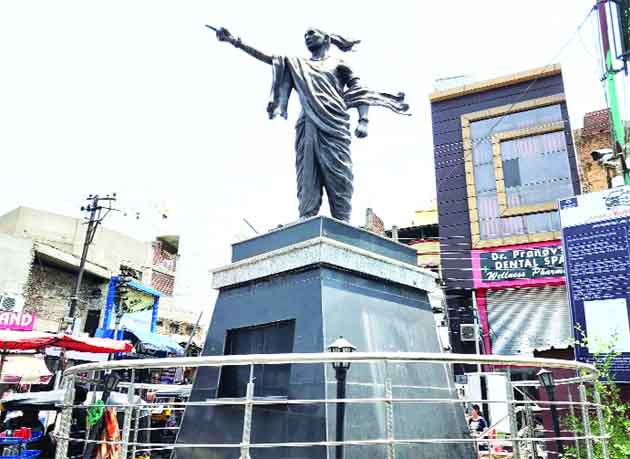 Shiv Chander Sharma
Thousands of people pass from Parade area in the once walled Jammu city daily either travelling in Public Transport System matadors, own vehicles or on foot to reach main city markets or travelling towards posh localities of Gandhi Nagar and other areas. But few among them may be knowing about what the area was a few decades ago.
Now, among the busiest areas of Jammu city, Parade Ground area, where the Police Control Room is located at present, was once the Army Chawni during late Royal period and later the place served as main Bus Stand of Jammu. Recently a statue of Chanakya has been installed and so this historic chowk is called Chanakya Chowk
Because of Army Chawni during Royal period during the reign of last Maharaja of J&K Hari Singh (1925-1947 AD), the nearest crossing is still known as Kachi Chawni (Temporary Chawni). The area right from Parade Ground to Lower Kachi Chawni including present Government College for Women, Parade and Ranbir Library was the army area during the royal period.
However, the things changed after independence of the country in 1947, said Dr V R Pandotra. Recalling those days he said the look of the city was altogether different and then the city was walled. The look of the Parade area and the adjoining places was also different with old building of the Dogra Brahman Sabha existing at Parade which has been replaced by a new one, he added. Later, the place where now exists the Police Control Room served as main Bus Stand of the city and all the buses to various parts of the city and outside used to ply from this place. Big black and yellow taxis, which can only be seen in old Hindi movies now, then also used to ply from this area to Katra.
However, later in the 1960s the construction of new Bus Stand having ample space began and the Bus Stand was shifted in the backside of ancient Raghunath Temple in late sixties and in 1970s there was no remain of the old Bus Stand at Parade and all the buses on Inter-state and within the state routes started plying from the new Bus Stand which is now called General Bus Stand.
However, the things have been completely changed now and the new or general Bus Stand is too small to meet the present requirement of the people travlleing to and from Jammu. That is why buses for various places ply from different places now and the administration is searching for new place to shift General Bus Stand and so Transport Nagar near Narwal has come up while the Bus stand has been converted to Parking slot for all types of vehicles in the city centre
Sudesh Sharma, who was a child during the period when the Parade area was Army Chawni and later Bus Stand, said recalling her memories that the population of the city was far less and in the evening hours only few people used to walk in the markets or streets. Tongas (Horse driven carts) used to run from Parade to some areas in the city and despite smaller roads no traffic jams would occur.
The area around Parade had few shops in those times which has been converted into a hub of business activities in the old city. Despite many of the families having shifted to new colonies they still come to old city for shopping till date and that is why it is very difficult for the pedestrians to walk not to talk of driving a vehicle due to heavy traffic in the area.