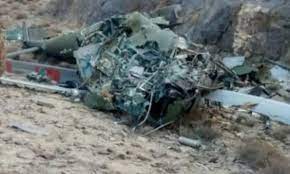 Islamabad, Aug 8: Pakistan’s top investigation body has constituted a four-member team to trace and nab those involved in an anti-Army social media campaign that the security establishment “orchestrated” a recent helicopter crash, in which six senior military officers were killed, to gain sympathy.
A top Pakistan Army general and five senior military officials were killed when their Mi-17 helicopter crashed due to bad weather while on a flood relief operation in troubled Balochistan province on August 1.
Some social media tweets after the crash suggested that the crash was “orchestrated” through conspiracy by the country’s security establishment to gain sympathy.
The Pakistan Army was shocked, first due to the crash which cost it the head of the country’s key XII Corps headquartered at Quetta along with five other officers and a soldier, and second the negative campaign on social media.
The six individuals on board included the Commander XII Corps Lt Gen Sarfraz Ali.
The Federal Investigation Agency (FIA) sprang into action after Prime Minister Shehbaz Sharif said on Sunday that belittling and ridiculing the sacrifices of martyrs was horrifying.
Hours after the premier’s tweet, Information Minister Marriyum Aurangzeb confirmed that the FIA will lead the efforts to blunt the campaign unleashed on social media.
She said that the FIA’s additional director general of the cybercrime wing Mohammad Jaffar and director (cybercrime, north) Waqaruddin Saeed and two more officials would be the members of the team.
Though it is not exactly known who was mentoring the campaign, Pakistan’s ruling coalition blamed the Pakistan Tehreek-e-Insaf (PTI) party and its chief Imran Khan.
The government leaders also criticised Khan and Pakistan President Arif Alvi, who belongs to the PTI, for not attending the funeral of Lt-Gen Sarfaraz Ali and other military personnel.
But the PTI leadership rejected the criticism, saying President Alvi phoned the families of the military personnel to offer condolences and Khan, a former prime minister, visited the residence of Lt-Gen Ali and met his family.
Separately, the Balochistan Assembly in a joint condolence resolution paid tributes to the six army officers who were killed in the helicopter crash.
“Whenever we need the help of the people, our brave army personnel and officers rush to provide help and comfort to the needy people,” the resolution said and expressed deepest grief and pain over the tragic incident that deprived the nation of the senior army officers. (PTI)