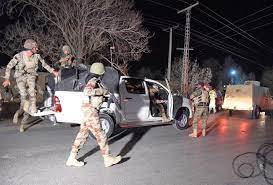 Islamabad, July 30: At least six Baloch separatists were killed in a heavy exchange of fire with security forces in the Hoshab area of Kech district during an operation, the Inter-Services Public Relations (ISPR) said in a statement here on Saturday.
A soldier of the Pakistan army, was also killed in the operation, while another was injured. Pakistan’s security forces conducted the operation based on information that a group of Baloch separatists were on the move on motorcycles from Kech to Panjgur.
The forces immediately cordoned off the area and combed it to apprehend them. This led to a stand off which culminated into a heavy exchange of fire, in which six separatists were martyred. (UNI)