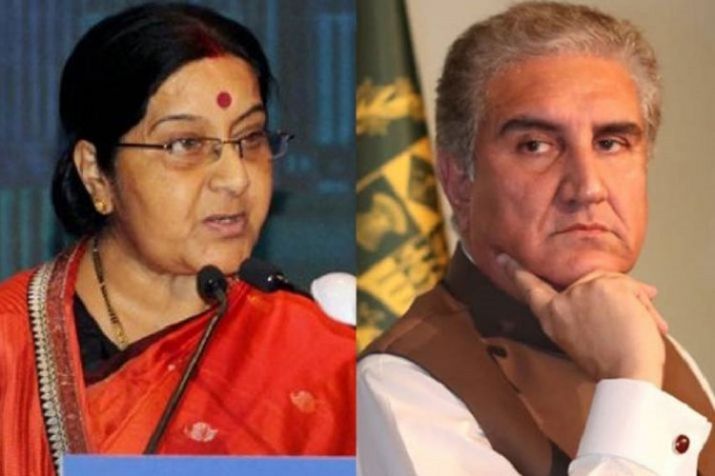 ISLAMABAD: A day before Prime Minister Narendra Modi cruised back to power so hoped by his Pakistan counterpart Imran Khan, Islamabad favoured peaceful resolution of disputes with India and said it was ready to hold negotiations on all outstanding issues.
During an “informal chat” with External Affairs Minister Sushma Swaraj in the Kyrgyz capital Bishkek, Foreign Minister Shah Mehmood Qureshi said Pakistan was committed to the vision of Prime Minister Khan of pursuing peaceful diplomacy with India.

“We made it clear to her that we want all the matters resolved through dialogue, and that Prime Minister Imran Khan had said in his very first speech that if India takes one step forward, we would take two steps forward.
“Even today we are ready for a dialogue,” the Pakistan Foreign Office quoted Qureshi as saying.
Qureshi said, “Sushma Ji pointed that I sometimes speak harsh so she has brought some sweets for me so that I talk sweet.
“In response, I said we are positive on holding negotiations with your country on all issues.”
In July last year, Modi had phoned Khan and congratulated him on the victory in general election.
Earlier on Wednesday addressing the Council of Foreign Ministers of the Shanghai Cooperation Organisation, Qureshi said that enduring peace and prosperity in South Asia hinged on good-faith diplomacy and result-oriented dialogue.
There were also reports that the Imran Khan administration is considering appointing a national security advisor to resume back channel diplomacy with India.
(AGENCIES)