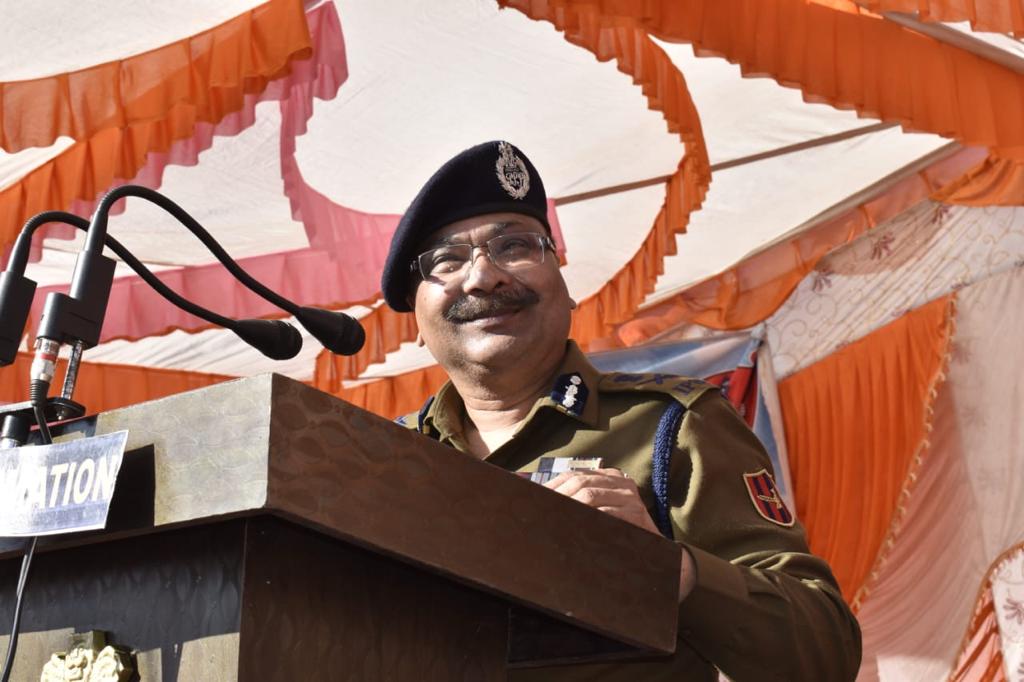 Jammu, Dec 3: Jammu and Kashmir Director General of Police Dilbag Singh on Saturday said that Pakistan and its agencies are making attempts to revive terror base in the Doda-Kishtwar-Ramban Range by misguiding youth.
“Pakistan and its agencies are continuously making attempts to revive the terror base here by misguiding the youth and everyone has to play its role in thwarting anti-peace elements,” said the police chief speaking at the closing ceremony of cricket tournament under the theme (Khelo Khel Bhuloo Nasha) at Doda district.
He said that the smiling faces of youth today indicate the return of good times in the area and hoped that youth would provide their support in strengthening the peace further.
Singh had a day long tour of Doda-Kishtwar-Ramban range and he also distributed trophies and prizes among the teams and players.
He earlier chaired Joint officers’ meeting at Delta Force Headquarters Dharmund Ramban and took stock of the security scenario of the Doda-Kishtwar Range and also inaugurated checking Plaza at Banihal.
The DGP was accompanied by ADG, CRPF, J&K Daljit Singh, and ADGP Jammu Zone Mukesh Singh on his tour. Besides them, the concluding ceremony of the cricket tournament organized was by J&K Police was attended by DIG DKR, Sunil Gupta, DC Doda Vishesh Paul Mahajan, SSP Kishtwar Shafqat Hussain, SSP Doda Abdul Qayoom, other jurisdictional officers and huge gathering of people.
The final of the tournament was played between Bhallesa and Bhaderwah in which Bhallesa emerged as winners.
DGP also congratulated the women teams for their presence and issued directions for organizing a separate cricket tournament for women in the area.
He also directed for organizing a cricket tournament in Bhaderwah area.
The DGP emphasized upon the youth to spread the message of drug free society adding that drug abuse is a bigger enemy, than terrorism today.
He said that terrorism targets the individuals but drugs affect the families and society as a whole and added that we all have to work collectively to put an end to this menace.
He said that like terrorism, the source of spreading the menace of drugs in J&K is Pakistan who has evil intention to destroy our youth and generate funds for terror groups.
He said as new persons are getting involved in the illicit trade of drugs it is the duty of every citizen to identify these persons and help the police in taking action against them.
The DGP said that Jammu and Kashmir Police is taking stringent measures against the drug trade, adding that around 1200 cases have been registered and 2000 involved have been arrested during the year so far.
These figures itself indicate the magnitude of the problem, he added.
With regard to the terrorism, the DGP said that the chapter of terrorism is by and large closing and attributed the success to youth and people of J&K for their support in war against terrorism. He said that it was not possible to win over the terrorism without the support of the people of J&K.
Going down the memory lane the DGP referred to his tenure as SSP Doda and said that despite difficult circumstances, people of the area always stood for peace.
ADGP Jammu Mukesh Singh while speaking on the occasion said that the tournament has been organized under the theme “Khelo Khel Bhuloo Nasha” and added that I want to add another term in it which is “Bhuloo Aatankwad”. The ADGP said that many attempts are being made from across the borders for misleading the youth of J&K adding that barring a few cases the youth of Doda have foiled these attempts.
He said that it is a very pleasant moment for all of us as the DGP J&K and ADG CRPF have come here to encourage the teams.
He said that Jammu and Kashmir Police has been working with and for the people, and would continue to do so for the good of the society.
Earlier, the DGP held a joint review meeting at Delta Force Headquarters at Dharmund where on his arrival he was received by GOC, Delta Force, Maj Gen Ajay Kumar, DIG, DKR Sunil Gupta and other army and police officers.
The meeting was attended by ADG, CRPF, J&K Daljit Singh, ADGP Jammu Zone Mukesh Singh, IGP CRPF Jammu Sector, P.S Ranpise, DIG, DKR Sunil Gupta, SP Ramban Mohita Sharma and other senior police officers and commandants of army of the range.
During the meeting threadbare discussion was held regarding the present security scenario and existing challenges.
The officers also discussed highway security measures. The DGP emphasized for enhancing synergy between the forces and for putting in joint efforts in eliminating the remaining terrorists in J&K. Counter measures for narco trade and weapon dropping was also discussed during the meeting.
The GOC briefed the DGP regarding the measures taken by the counter terrorism grid in Doda, Kishtwar and in Ramban areas.
The DGP also inaugurated Checking Plaza at Banihal near Navyug Tunnel which will provide a separate checking place for Kashmir based vehicles and will help in smooth traffic management in Banihal particularly near the Navyug Tunnel. (Agencies)