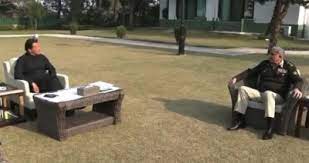 ISLAMABAD, Feb 15: Pakistan’s Chief of the Army Staff Gen Qamar Bajwa on Monday met President Arif Alvi and Prime Minister Imran, Dawn reported on Tuesday.
This is a rare occassion when the Pakistan army chief has met both heads of the state and the government on the same day.
The army chief’s meeting with the prime minister took place on the sidelines of the apex committee on Afghanistan’s session, the brevity of a statement on the Khan-Bajwa meeting issued by the PMO added to the speculations among political observers about what was discussed between them.
The PMO statement said was Chief of Army Staff General Qamar Javed Bajwa called on Prime Minister Imran Khan today. Professional matters pertaining to Pakistan Army were discussed during the meeting.
On the other hand the statement from the president’s office gave a little more insight into the meeting between President Alvi and Gen Bajwa, suggesting that they had a focused discussion on the recent terrorism incidents in Balochistan and Khyber Pakhtunkhwa.
Gen Bajwa briefed the President about the professional preparedness and measures being taken by the security forces against the terrorist elements, the statement from the president’s office stated, adding that the army chief reiterated the resolve ?to eliminate militants and miscreants from the country. (UNI)