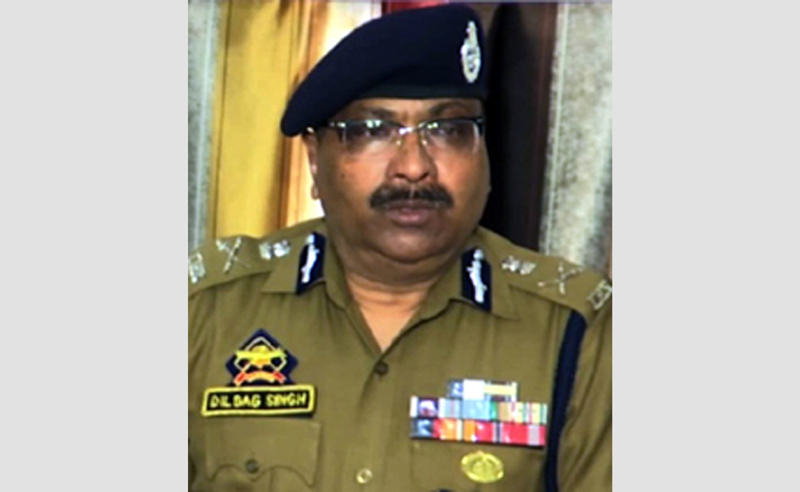 JAMMU, Feb 25: Director General of Police (DGP) Dilbag Singh today said that rare type of chemical in liquid form has been recovered from the militants for the first time in Arnia yesterday as he charged the neighbouring country, without naming Pakistan, for trying to keep alive the dying militancy in Jammu and Kashmir.

Click here to watch video
Speaking to media persons at Udhampur on the sidelines of a function, Dilbag said in the consignment of arms, ammunition and explosives sent from drone yesterday and seized at Arnia, chemical in liquid form has been found for the first time and efforts are on to ascertain its nature.
Asserting that the neighbour continued mischief by sending consignment of arms, ammunition and explosives, the J&K police chief said the good thing is that they are being seized before falling into hands of the militants.
“The neighbour has long history of hatching conspiracies to disturb peace in Jammu and Kashmir. The militancy is dying but they want to keep it alive. They are sending militants and consignments of weapons through tunnels, drones etc but such attempts are being successfully thwarted,” Dilbag said.
Last year, he pointed out, 182 militants were killed but number of weapons recovered was more than 300 which indicated that the neighbour wants to make more militants here.
“Pakistan is also trying to overcome shortage of weapons by sending consignments through drones but our team network and Physical Security Grid are doing good job and recovering the weaponry,” the DGP said.
He added that Pakistan is also sending narcotics with arms and money fetched from drugs is being pumped for fanning the militancy.
Dilbag said that Pakistan is providing oxygen to terror groups in Jammu and Kashmir.
“Attempts are being continuously made from across the border to provide oxygen to the terror groups by dropping weapons through drones and other sources,” Singh said.
Singh at the inaugural ceremony of the Women Police Station in Udhampur also said that it is the policy of the Government to provide better and separate legal support to the women.
Crime against women have been taken seriously and to bring down any type of crime against women, the Women Police Station has been opened where the victims of crime will be dealt with by women officers and officials”, he said.
The DGP added that opening up separate Women Police Stations will provide an opportunity to the women of the respective areas to come forward more freely to report crime as they would be able to express their grievances more comfortably.
Women Police Stations have been opened at all range levels across Jammu and Kashmir, the DGP informed.
Earlier, he inaugurated Shoot House at SKPA Udhampur and Women Police Station visited the proposed site of Battalion Headquarters and also interacted with officers undergoing training at SKPA Udhampur.
He was flanked by ADGP Jammu Mukesh Singh and ADGP (Hqrs) PHQ M K Sinha.