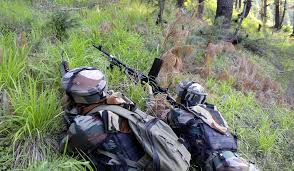 SRINAGAR : Pakistani troops violated ceasefire and fired mortars and other artillery at the Line of Control (LoC) in Gurez sector in north Kashmir district of Bandipora, a defence ministry spokesman said.
He said Thursday afternoon Pak troops resorted to unprovoked firing and shelling at the LoC in Gurez sector in Bandipora district targeting forward posts and civilian areas. He said the main target was Kanzalwan near the LoC.
However, there was no report of any loss of life or damage to property in the Pak shelling. He said befitting response is being given to Pakistan.
However, damage suffered by the Pak troops was not immediately known.
Senior Army and police officers said Pak is violating ceasefire to help militants to sneak into this side from Pakistan-occupied-Kashmir (PoK) before the infiltration routes are closed due to snowfall in winters.
However, they said troops guarding the LoC are already on high alert to foil any such infiltration attempt. (AGENCIES)