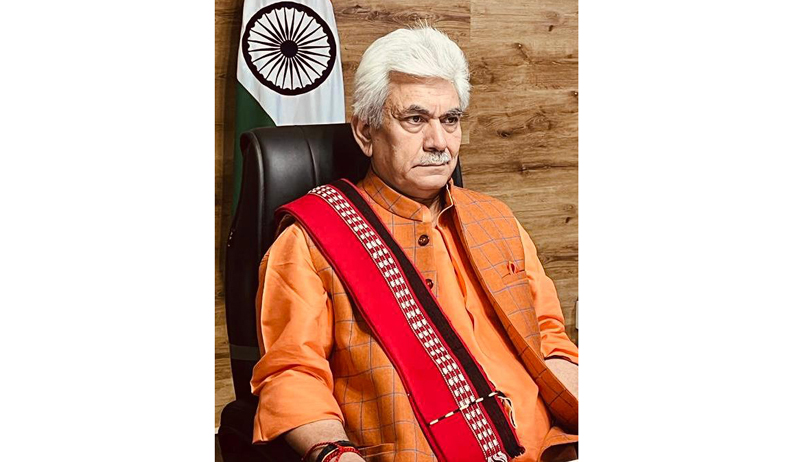 Calls for bonus marks to encourage youth to take NCC

Sanjeev Pargal
JAMMU, Feb 20: Lieutenant Governor Manoj Sinha said today that Pakistan under a well knit conspiracy and unholy practices is sending narcotics into Jammu and Kashmir to spoil youth but the Government has taken series of measures to deal with the menace.
Without naming Pakistan, Sinha said the neighbour is conspiring by sending the narcotics into Jammu and Kashmir but various Government departments including Social Welfare, Mission Youth and Health etc have taken series of initiatives to help youth and overcome the problem of drug addiction.
“We have set up Drug De-addiction Monitoring Committees,” he said in his Radio address ‘Awaam Ki Awaaz’, which is aired on every third Sunday of the month.
Describing drug addiction as a social problem, the Lieutenant Governor said a multi-dimensional approach has been adopted by the Government to deal with it.
Lauding role of the security personnel working in Jammu and Kashmir, Sinha referred to recent increase of ex-gratia relief to the kin of soldiers martyred outside Jammu and Kashmir from Rs 5 lakh to Rs 25 lakh.
“Under the guidance of Prime Minister Narendra Modi, we have taken several welfare measures for Army, security forces and police personnel. Seniority dispute of police has been resolved. Women were given 15 percent reservation in Police,” he said and noted a suggestion that he should visit the District Police Lines (DPLs) regularly to ascertain problems faced by the police personnel to address them.
Sinha said the New Education Policy is being implemented under guidance of the Prime Minister and also referred to role of the NCC saying the students should be encouraged to join it.
Recalling his recent meeting with NCC Additional Director General for J&K and Ladakh Ranjan Mahajan, he called for considering bonus marks to encourage youth to join NCC.
Referring to COVID and closure of educational institutions because of the pandemic, the Lieutenant Governor said educational institutions have started functioning in Jammu from February 14 while some others will reopen on February 21 while they will resume working in Kashmir on February 28.
He referred to setting up of the Happiness Zones in some of the schools saying the administration is concerned about issues faced by the students.
An official handout said:- Referring to the suggestion of Sheeba Nair of Oasis NGO on post-COVID Educational reforms, the Lt Governor observed that education and health of children are the biggest responsibilities of the administration.
Responding to the suggestions of Naveed Ahmad from Baramulla; Umair Hassan; Zahoor Indraabi from Kulgam ; Rishu Gupta and Mohammad Iqbal pertaining to expansion of National Cadet Corps (NCC) in the UT; introduction of Philosophy subject in post-graduation in Kashmir University; development of Aharbal as offbeat iconic tourist site of J&K with better facilities, promotion & branding and involvement of local community; promoting Financial Literacy and launching special drive to facilitate delivery of financial services, respectively, Sinha directed the concerned departments and officials to take necessary measures on the valuable insights received from the citizens and incorporate them in their policies.
The Lt Governor welcomed the suggestion made by Rahul Kumar from Samba regarding PPP Model to bridge the digital divide & create an enabling environment for Digital Inclusion. He said the Government is committed to remove all the social imbalances.
Digital technology plays a vital role in inclusive growth and bridging the gap between government’s programmes and citizens, he observed.
“To fulfill Prime Minister’s resolve of making all villages digitally literate, we have decided to launch Digital Jammu Kashmir. In the coming days, under this campaign, the administration will work towards digital services and digital literacy”, he added.
Referring to the suggestion made by Aditya Sangotra from Udhampur for creating a robust and vibrant eco-system for scouting & training of young sporting talent in the UT, the Lt Governor observed that investment in sports-related skills is one of the many ways to reap demographic dividend.
“We have rolled out the historic J&K Sports Policy-2022 which focuses on creating world-class infrastructure, coaching, training of sportspersons including para-athletes & players, and varied opportunities for growth in sports”, added the Lt Governor.
Vidhusi and Nandini Sharma of Rajouri raised the issues of mental health and emotional wellbeing of students, to which the Lt Governor said that the Government understands the need for providing psycho-social support to students.
Shammi Maniyal, a young entrepreneur from Samba and Sonu Singh, a progressive farmer from Kathua, received a special mention in today’s programme for emerging as a source of inspiration for the youth of Jammu and Kashmir with their innovative approach. “Our commitment is to ensure every citizen enjoys equal opportunity to grow, and reasonable & affordable access to basic amenities,” the Lt Governor said.
He also urged the people to dedicate themselves to the betterment of society. “We should strengthen our faith in the goodness of mankind and inspire one and all to lead a virtuous life. Let us all take a pledge today to follow the path of equality and social harmony, and build a Jammu Kashmir where all sections of the society together contribute in shaping the future of this beautiful Union Territory,” he added.