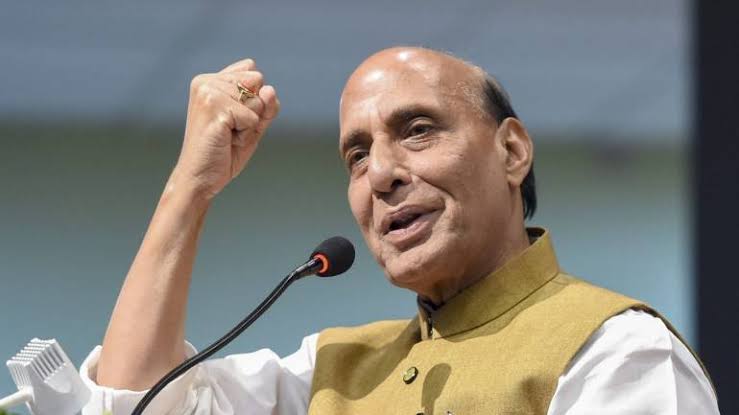 NEW DELHI, Jan 28:
Defence Minister Rajnath Singh today lashed out at Pakistan for using “terrorism as a state policy” towards India rather than peacefully settling disputes through dialogue, and said it must take “demonstrable steps” against terror groups responsible for launching various attacks on India from its soil.
Addressing a conference here, Singh also targeted Pakistan over the SAARC impasse, saying the full potential of the bloc has not been realised due to the “behaviour and policies of a single country”.
He said it is essential that terrorists and their ideological and financial networks are cut off and do not receive state support.
“We have made it clear that talks and terror cannot go together and that Pakistan must take demonstrable steps against terror groups responsible for launching various attacks on India from its soil,” he said at the 12th South Asia Conference on ‘India’s Neighbourhood First Policy: Regional Perceptions’.
Mumbai, Pathankot, Uri and Pulwama attacks are “grim reminders of state-sponsored terrorism by a neighbouring country”, Singh said, while asserting that the South Asia region must unite in its efforts to defeat terrorism.
In a statement released by the Defence Ministry in the evening, Singh was quoted as saying that India is fully capable of giving a firm response to cross-border terrorism, and strikes against terrorist attacks in 2016 and 2019 have demonstrated the nation’s firm resolve to tackle the menace.
On India’s ‘Neighbourhood First’ policy, the Union minister said, “India is engaged in conversations with its neighbours except one country in order to develop a joint approach for regional peace and security.
“True pathway to regional peace and security lies in understanding each other’s sensitivities and following basic principles of non-interference in each other’s internal affairs,” he said.
“With exception of one country, and I would like to say frankly Pakistan, our region has adhered to the principle,” Singh said.
The Defence Minister cited how the SAARC motor vehicles agreement was stalled at the last Kathmandu session in 2015, in a direct reference to Pakistan.
The South Asian Association for Regional Cooperation (SAARC) comprises Afghanistan, Bangladesh, Bhutan, India, the Maldives, Nepal, Pakistan and Sri Lanka.
“The same country has preferred to use terrorism as a state policy towards India, rather than peaceful settlement of disputes through dialogue. Its use of terror as an instrument of its foreign and security policy has promoted radicalism and terrorism in the region and posed critical challenges to security of all states,” he said, targeting Pakistan.
Singh said that the Easter Bomb attacks in Colombo in April 2019 were the latest instance of how dangerous such a policy has been for the region and beyond.
Emphasising further on India’s ‘Neighbourhood First’ Policy, he quoted Sanskrit slokas to underline India’s ethos of inclusivity and unity, and said it has always harboured the philosophy of hospitality driven by ‘Vasudhaiva Kutumbakam’.
In the Modi government’s second term, the country’s neighbourhood has been recognised as the most important priority of its foreign policy, he said.
Leaders of SAARC were invited by Prime Minister Narendra Modi for his swearing-in ceremony in 2014 and BIMSTEC leaders were invited for the 2019 oath-taking event, indicating his personal commitment to the neighbourhood, the Union minister said.
The Government has committed about USD 13.14 billion in credit lines and about USD 4 billion in assistance, in the neighbourhood over the last decade, Singh said.
He asserted India is willing to play a “leading and critical role” at the development front under this Policy, by making resources available to neighbours to build necessary infrastructure that will enable connectivity and easy flow of region-wide movement of goods, services, people and ideas.
“As the largest country of the region, mindful of its asymmetric preponderance, and development aspirations of its neighbours, India has always made efforts to share its prosperity with the neighbourhood,” Singh said.
India regards peace and prosperity in the neighbourhood as “critical” to its own growth and self-interest, he said in his address at the conference hosted by defence think-tank IDSA (Institute for Defence Studies and Analyses), which was also attended by Bhutanese Ambassador V Namgyel, and Sanjaya Baru, former media advisor to ex-prime minister Manmohan Singh.
“Under the Neighbourhood First Policy, intensifying bilateral developmental partnership with countries in the region may create the necessary impulse for regional cooperation in South Asia in the long run,” the minister said.
The minister also asserted that South Asia is at a “critical juncture of history”.
“We should not hold regional prosperity hostage to the interests of states who are obstructing all efforts aimed at regional cooperation. Our intra-regional trade has been abysmally low. We have to transcend these limitations,” he added.
The minister flagged that the South Asia region faces the threats of “military conflict, terrorism, piracy, climate change, natural disasters and energy security”.
“Our intra-regional trade flows are among the lowest in the world. All this can change if we build cooperative structures that deepen mutual trust,” he said. (PTI)