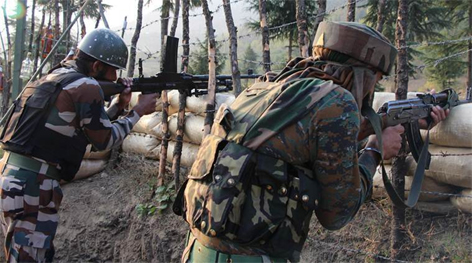 Excelsior Correspondent
JAMMU, Oct 7: In third such incident in the past over two weeks, a Pakistani intruder was arrested today by Border Security Force (BSF) personnel along the International Border (IB) in RS Pura sector.
Click here to watch video
The intruder was apprehended soon after he crossed into this side at village Nawa Pind in R S Pura sector.
The arrested infiltrator was being questioned, they said refusing further details.
He is the second Pakistani intruder arrested along the Indo-Pak border in Jammu within five days and third in the past 17 days.
A Pakistani teenager was arrested in Akhnoor sector of Jammu on October 3 while another Pakistani national was arrested from Chandu Check village of R S Pura on September 21.
Meanwhile, Pakistan army today again resorted to heavy mortar shelling and firing on the Line of Control (LoC) in Digwar sector of Poonch district.
Reports said Pakistan army violated the ceasefire targeting forward civilian areas in Digwar sector this afternoon. The Indian side retaliated effectively, leading to heavy exchanges which continued for about couple of hours.
However, there was no report of any casualty or damage on the Indian side. Pakistan was reported to have suffered some damage as their two posts were hit in retaliatory action by the Indian troops.
Several mortar shells fell near civilian houses in Digwar but exploded harmlessly.
Pakistan army has been regularly indulging in ceasefire violations on the LoC targeting forward posts and civilian areas and were being given befitting reply by the Indian troops.