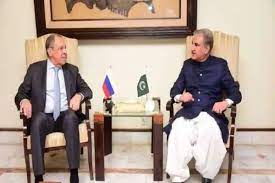 Islamabad, Apr 7: Pakistan’s Foreign Minister Shah Mahmood Qureshi on Wednesday held talks with his Russian counterpart Sergey Lavrov here and the two leaders are expected to focus on strengthening bilateral economic and defence ties and discuss the Afghan peace process.
Pakistan Television footage showed that Lavrov, the first Russian foreign minister to visit Pakistan since 2012, arrived at the Ministry of Foreign Affairs where he was welcomed by Qureshi.
Lavrov planted a sapling in the premises of the ministry and then went inside the building for a joint photo session, followed by the delegation-level talks.
Officials said that the two foreign ministers will hold in-depth discussion on various topics of bilateral interest with the aim to expand the multi-faceted ties.
The issues of Afghan peace will also be prominent in the parleys.
During the visit, the Russian foreign minister will also call on Prime Minister Imran Khan and have interaction with other dignitaries. He is also expected to meet Pakistan Army chief Gen. Qamar Javed Bajwa.
Qureshi said ahead of Lavorv’s arrival that there was a lot of scope for economic cooperation. He said that Russia was playing a role in the Afghan peace process.
He later on tweeted that the Russian Foreign Minister’s visit is in line with the commitment of Islamabad and Moscow to further strengthen their bilateral ties and deepening the growing bonds of cooperation and collaboration.
Separately, the Russian Foreign Ministry, in an official statement on Lavrov’s visit to Islamabad, said that Pakistan is an important foreign policy partner of Russia and fruitful interaction is maintained at international organisations, primarily in the UN and its specialised agencies.
“The cooperation between Moscow and Islamabad is based on the coincidence or similarity of positions on most of the problems of the world community, including issues of strategic stability and countering terrorism,” according to the statement.
The relations have come a long way from the Cold War hostility to current level cooperation and there is hope to further expand it in coming years.
Earlier, the Russian Foreign Minister arrived here on Tuesday on a two-day official visit with the objective to deepen cooperation in different fields.
He was received by Qureshi at the airport where the two leaders held a brief chat. (PTI)