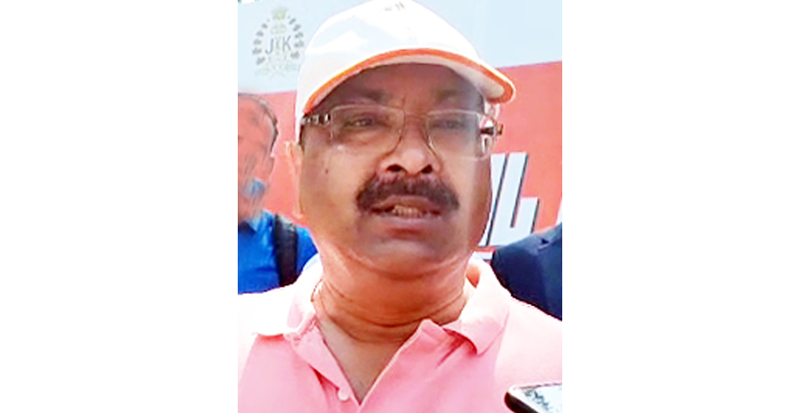 Srinagar, Sept 23: Director General of Police (DGP) Dilbag Singh today said that Pakistan was playing bloody game in Kashmir through Hurriyat Conference, militants and other anti-peace elements but that has been defeated.
Speaking to reporters on the sidelines of ‘Pedal For Peace’ event here, the DGP said that the Hurriyat Conference and other anti-peace elements used to play a “bloody game” in Kashmir on behalf of their mentors across.
“Almost all the anti-peace elements have been wiped out and those remaining will be cleared off soon,” Singh said.
He said that a lot of anti-peace elements were wiped out in Kashmir including militants and remaining ones would be cleared soon.
The DGP said that there were many thorns in the garden of peace that were removed by police along with security forces.
“Those remaining will be removed as well and that won’t take much time,” he said.
Singh said that ‘Pedal for Peace’ is not just an event but a move that connects police directly with youth and people.
“There are many such events on cards that include Jashne-e-Dal, Marathon race and series of other events,” he said.
About change taking place on ground, he said that Zainapora area of Shopian paints a different picture today.
“The place was once hub of militants where militants would openly shoot videos and circulate the same on the social media. Today, we have youth there who want cricket field, dispensary and a cricket academy,” he said.
About downtown youth, the police chief said that he was glad to see the downtown youth choosing sports and other competitive exams as their career.
Replying to a query about security situation in Kashmir, he said that security situation has improved a lot in the Valley and today, a common man can heave a sigh of relief and breathe openly in a free air.
Addressing cyclists, the DGP said that every pedal you do is changing the scenario of Jammu and Kashmir towards a new milestone of a more peaceful environment. He said that when “we get the support and company of people it not only boosts our morale but it feels we are on the same path aiming for the same goal.”
“The path is comfortable now and will be more comfortable in the coming times,” he added.
Appreciating the participants the DGP said that a lot of hurdles have been crossed adding that remaining hurdles would also be scaled.
Singh said police is organizing a number of events and programmes which are aimed for participation of Police and people together. “Whether in uniform or without uniform we are one family and our mission is one that is bright future for our children, safe and secure life for people of all ages. Referring to the upcoming event of Jashn-e-Dal the DGP said that Dal lake is our pride, Kashmir’s beauty is not talked without Dal lake and it should be our prime responsibility to help in keeping it neat and clean,” he said.
Referring to the tourist influx this year the DGP said the beauty and the hospitality of Kashmir is the talk of the world again and hoped that it would continue to be top priority of the tourists in the coming time. He said that the cooperation and support Jammu and Kashmir Police is getting from the people will help further in consolidating the prevailing peace.