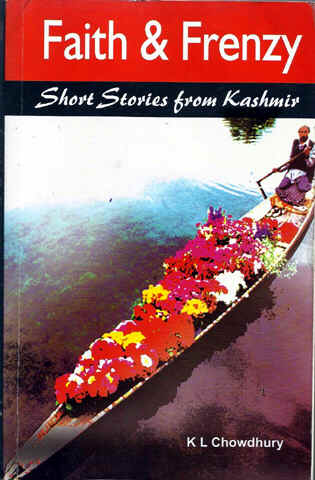 Prof. R N Kaul
So absorbingly fascinating is the book under review that in spite of the passing away of my elder brother the same day I received a copy, I got glued to its contents and finished reading it almost at one go. Much has been written on the so-called Kashmir problem and on the mayhem perpetrated by jihadi , and much on the trauma of Kashmiri Pandits hounded out of their hearths & homes,  and on the self-inflicted deaths and miseries of Kashmiri Muslims. But “Faith and Frenzy” strikes a conspicuous contrast to earlier books. All the previous attempts look like ‘sound and fury’ only. What marks this book as extraordinary is its sensitivity and  its deep-felt pain translated into art. It is a sort of wedlock between Sensitivity and Aesthetics. Dr. K L Chowdhury has brought into a close embrace the Muse of History and the Muse of Imagination. Real events, real people have been so aptly fictionalized that one merges imperceptibly with the other.
It is not only a coalescing of Reality and Illusion, of fact and fiction. There are other colourful threads woven into a fine fabric that is “Faith and Frenzy”. The author harnesses his knowledge of psychology and medicine, of anatomy and of physiology in creating a thing of beauty and in making it a joy for ever from the artistic point of view alone. He has selected, refined and embellished the raw material available to him through his personal experience. And there pervades above all the ingredients that make the book – a vague halo, may be as thin as gossamer – a vision of better times to come, of Kashmiriyat reasserting itself in all its pristine glory – after the catharsis of suffering.
K L Chowdhury is a conscious artist capable of hiding his art in what looks a simple and spontaneous utterance. In his search for artistic excellence he does not lose any moment to describe the sufferings of his community. The title story ‘Faith and Frenzy’ and ‘A Place to Die’ most faithfully and sensitively describe the miseries of Kashmiri Pandits catapulted from a lugubrious climate and comfortable homes into inhospitable terrains. The story of Shyam Lal and his wife is most poignantly tragic. Shyam Lal is condemned to be hanged because the militants are convinced of his sons being informants and, hence, enemies of the so called tehrik for azaadi. He providentially escapes the noose, but is slashed repeatedly by a knife and finally dragged into the river to drown. But the chill water mercifully stops his bleeding and brings him back to life. In ‘A Place to Die’. Brij Nath Daftari, dying from terminal cancer, finds each place in Jammu out of bounds as he is tossed from pillar to post, from Sarwal to the interior city, and to Nanak Nagar.
When one follows the plots of the stories, one feels impressed how a medico by profession finds the technique to arouse curiosity and keep the reader in suspense till the end. And here and there the author introduces super touches to suggest how Nature follows her chores with complete indifference to man’s losses. While Shyam Lal is prostrate on the ground and as good as dead, Chowdhury describes Nature thus:
“The clouds were moving languidly, the setting sun – large and red – threw long shadows of the leafless trees, crisscrossing the field like dancing skeletons in a surreal play of light and shade. Dusk was descending fast and the birds were flitting across the sky to their nests “.     Chowdhury portrays real human beings with their physical appearances, their traits and eccentricities, casting each character in a distinct mould. He is like a portrait painter in words as Rembrandt was in colours. We not only meet and see Saligram or Gulla in flesh and blood; we seem to feel them and touch them. Saligram reminds one of Hugo’s Causimodo of Notre Dame. Gulla of Prang endears himself to us by his shy but frank demeanor. Chowdhury also emerges as an artist of humour which he introduces as a foil. When Saligram is informed of his prospective marriage to a Kishtwari woman with three children, Chowdhury describes his reaction thus:  “The prospect of a cackling mother hen with a large brood disturbing the quiet of his home gave Saligram the creeps”.
K L Chowdhury has converted real experiences into the literary genre called the short story. He has succeeded to a large extent in utilizing all the artistic paraphernalia to make each story grip the reader’s attention. There is a dramatic start, a quick movement of the plot; there is suspense and an expected climax or an anti-climax. There may not be an O’Henry touch at the end, for Chowdhury prefers to leave the surprise end to the imagination of the reader.
But the best quality of the book is revealed in the author’s complete grasp of English language – its nuances, its rhythms, its rich vocabulary, its Bible-like simplicity. And here he is with a vocabulary which is rich in its crispness, in its appropriateness and in its rhythmical variety. Dr. K L Chowdhry has acquired a style at once mature and elegant.
The book is a must for lovers of facts and for lovers of fiction.