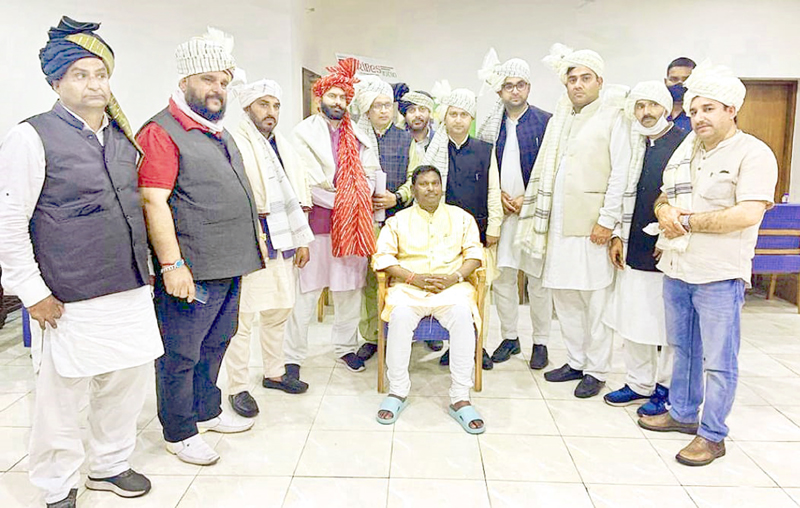 Excelsior Correspondent
NEW DELHI, Mar 16: Pahari Tribe ST Forum held a comprehensive round table conference with Union Minister for Tribal Affairs Arjun Munda, here today and briefed him regarding the core issue of Pahari Tribe which is seeking due ST status to the ethnicity.
The Union Minister assured that present Government at New Delhi is well aware of its commitments and justice to the Pahari Tribe is the prime commitment that the Prime Minister had made.
The delegation comprised of eleven members of Pahari Tribe ST Forum, including Adv Ahsan Mirza, Vikrant Sharma, Gurdev Thakur, Bharat Vaid, Shakti Sharma, Sajjad Mirza, Muneer Mirza, Adv Sanjeev Kumar, Adv Iftikhar Ahmed Bazmi, Sohail Malik and Nadeem Rafiq Khan. They highlighted the rich glorious cultural heritage of their Tribe and with full conviction raised their long pending demand seeking the grant of Scheduled Tribe status in favour of the Pahari ethnicity in J&K, UT.
Delegation pointed out that despite many recommendations and assurances since 1989, no decision has been taken so far for granting “Schedule Tribe” status to the deserving Pahari tribe. They expressed strong hope that the present Government would understand the plight of Pahari tribals.
They said that Pahari ethnicity constitutes a tribe and live in hilly tough terrain of border area and also are part of seasonal migration every year and fulfills all prerequisite to be given Schedule Tribe status.
Delegation also pointed out that from time to time, different committees and expert panels declared Pahari tribe as the downtrodden ethnicity. Further, they added, since 1993 every Governor and Chief Minister of J&K has recommended due ST status to Pahari tribe and even PMs also assured justice with the Pahari ethnicity.
Members also apprised Union Minister that Pahari population remained a victim of Pakistan’s mischievous activities directly from across the border as well as its sponsored terrorism.