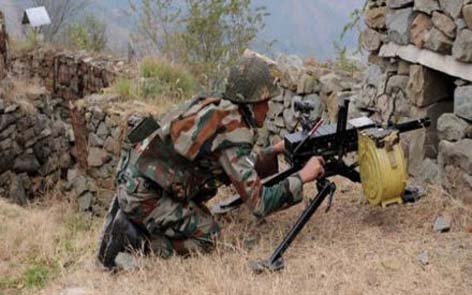 Sanjeev Pargal
JAMMU, Dec 19: Over a dozen Pakistan army personnel and militants including Special Services Group (SSG) commandos and Lashkar-e-Toiba (LeT) and Jaish-e-Mohammed (JeM) cadre were killed at Athmuqam, close to the Line of Control (LoC), opposite Kupwara sector where Pakistan’s Brigade Headquarters and SSG Centre were hit in retaliatory shelling and firing by the Indian side last night even as there was no let up in Pakistan shelling in Poonch and Rajouri districts where the enemy continued to target civilians.
Indian retaliatory action at Athmuqam opposite Kupwara sector of Kashmir valley was necessitated as reports were pouring in that large number of LeT and JeM militants had gathered there and were planning infiltration into the Indian side under covering fire from the Pakistani troops.
While there was no official word by the Indian Army on heavy damages suffered by the Pakistani troops at Athmuqam overnight, credible inputs revealed that Pakistan’s Brigade Headquarters was hit and badly damaged in the Indian retaliation that lasted about two hours. Pakistan’s SSG wing office was also housed in the same complex and it was too reported to have been damaged.
Over a dozen Pakistan army personnel, SSG commandos and militants of LeT and JeM outfits were reportedly killed in the Indian retaliation, sources said, adding that the Indian action was aimed at targeting launch pads of LeT and JeM, which were successfully hit.
The Indian side had regularly been getting reports about presence of LeT and JeM militants at the launch pads and daily ceasefire violations by the Pakistan army were aimed at facilitating the infiltration attempts, sources said, adding the pro-active action by the Army has thwarted Pakistani plot to push militants into the Kashmir valley for large scale disturbances.
However, there were no reports of any casualties on the Indian side.
On December 16, two Army jawans were martyred while two Pakistani troops and three infiltrators were killed in the Indian retaliation along the LoC in Jammu and Kashmir.
There were reports that Pakistan has kept artillery guns in Kotli area of Pakistan occupied Kashmir (PoK) for their further deployment at the LoC across twin border districts of Poonch and Rajouri which have been witnessing regular ceasefire violations by the Pakistani troops.
Pakistan army today again targeted forward defence posts and civilian areas in Mankote sector of Poonch and Nowshera sector of Rajouri district drawing very effective retaliation by the Indian side. Heavy exchange of firing between the two sides lasted about one and a half hour.
However, no casualties or damage were reported on the Indian side while reports of losses suffered by the Pakistani troops were awaited.
Pakistan army, as usual, directly targeted civilian locations but there was no casualty as the people hid themselves inside bunkers and houses well in time.
The LoC has been witnessing regular skirmishes between Indo-Pak troops since August 5 when the Central Government had scrapped special Constitutional provisions of Jammu and Kashmir and bifurcated the State into two Union Territories of J&K and Ladakh.
Only yesterday, Chief of Army Staff (COAS) Gen Bipin Rawat had stated that situation can escalate along the LoC any time and that the Army was prepared for it.
Meanwhile, a PoK resident has been arrested along the LoC in Nowshera sector of Rajouri district and booked under the Egress and Internal Movement (Control) Ordinance (EIMCO) Act, sources said.
Mohammad Sayeed, a resident of Sabzikote in Pakistan-occupied Kashmir, was captured by the Army three days ago from Nowshera sector while he was trying to sneak into this side.
After initial questioning by the Army, the infiltrator was handed over to Nowshera police station where a case was registered against him, sources said.
The case was registered under Section 2/3 of EIMCO Act.
No increment material was recovered from his possession but authorities were probing his motive to infiltrate into Nowshera sector, sources said.