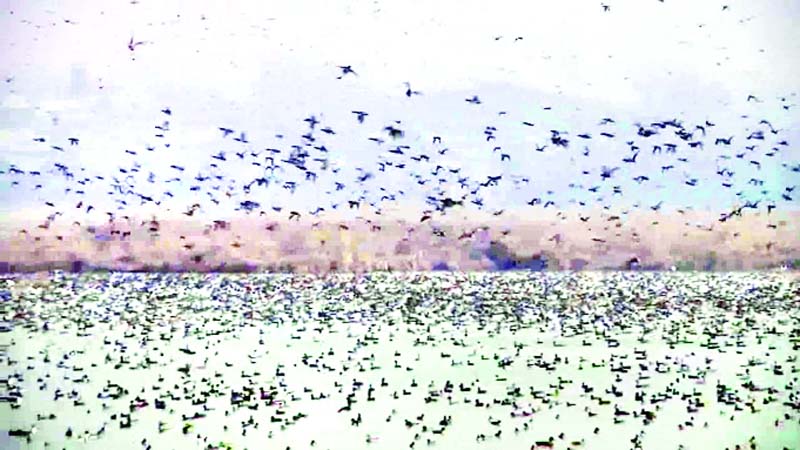 Srinagar, Jan 4: Around 4-5 lakh avian visitors have landed in the wetlands of the Valley during last three months and the Department of Wildlife is expecting the number to go higher in next two months.
To escape the extreme weather conditions, the birds migrate from their native places like Siberian, Northern Europe and Central Asian countries and take refuge on the wetlands of the Valley.
However, due to freezing of wetland for last two weeks, a large chunk of birds have shifted to Indian planes in search of food. “We are, however, feeding them when the water body freezes so that they may not leave the wetland”, Ifshan Dewan, Wildlife Warden Wetlands Kashmir, told Excelsior.
The birds usually leave these countries before the onset of winter and cover thousands of miles to reach here. They start trickling in the month of October and wetlands of Valley are full of colourful and diverse species of birds by the end of February. “The temperature is favorable for them here. The wetlands are conducive and serve as breeding grounds for them,” she said.
There are around nine wetlands including Hokersar, Higam, Pampore and Bandipora where these birds rest their flights. Among them, as per the department, Hokersar receives the highest number of visitors. “There are around 4-5 lakhs birds in Hokersar wetland these days. We regularly conduct census in the month of February and around 10-lakh birds have been recorded in the past census. We are expecting the same number of birds this year as well,” she said.
The good news for the bird lovers of Pampore is that a new specie, Red Headed Geese, has been reported from the wetland of the area. “Although they have been reported in Hyegam before.These species have been reported for the first time in this wetland. They came here on 5th January and will leave on 28th January,” she said.
An anti-poaching squad member, Gulam Mohidin Dar, said different species of birds have not been spotted in the Hokersar wetland over the years owing to its deterioration. “I have been working here for last 25-years and wetland has witnessed the determination of this wetland,” he said.
As Government turned a blind eye towards this natural marvel, the birds also stopped coming here, he added.
He, however, is hopeful that the ongoing drudging process would revive the lost glory of the wetland. “I have been working here for last 25-years. The wetlands has not remained what it used to be. The Government is carrying drugging of the wetland which will bring it back to the old shape,” he said.
Like previous years the authorities are claiming to act tough against the poachers who kill numerous birds every year. “We have deputed anti-poaching squads in these wetlands. We have also placed the Squads in Wular lake which otherwise is not in our administrative control. We will not let anyone to harm these birds, “Ifshan Dewan Said.