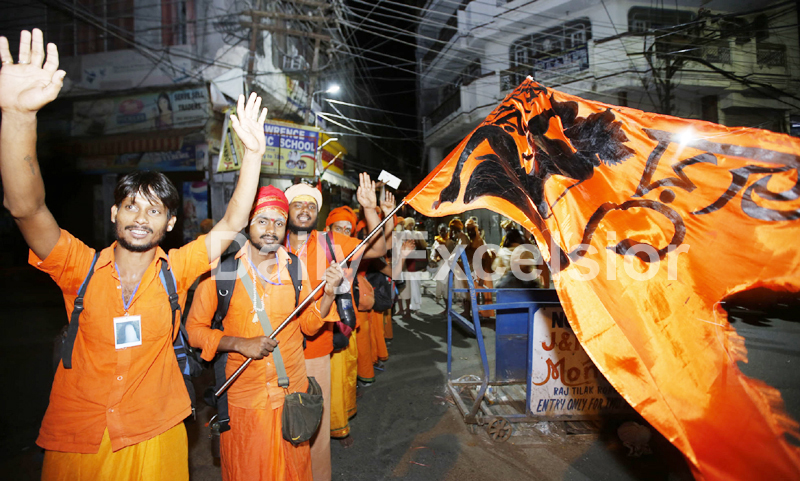 Excelsior Correspondent
JAMMU, July 6: Over 14,000 pilgrims drawn from different parts of the country paid obeisance at holy cave of Shri Amarnathji from twin tracks of Baltal and Chandanwari on sixth day of darshan today.
According to officials, on the sixth day of ongoing Shri Amarnathji Yatra which started from both the tracks on July 1, today 14,402 pilgrims offered prayers to naturally formed Ice Lingam at holy cave taking the total number of pilgrims performing darshan at 3880 metre high cave from sea level to 81,630.
Officials said 5,155 Yatris left for holy cave early this morning from Baltal and 6,075 from Chandanwari -Pahalgam track for the holy cave. The yatra is proceeding smoothly from both the tracks, officials added.

Meanwhile , 18 passengers were injured after the two buses which were on way to base camp of Baltal in Central Kashmir’s Ganderbal district, collided with each other at Turki-Tashlow near Wanpooh on Jammu- Srinagar National Highway, the officials said. The pilgrims hailing from Rajasthan were injured in accident. While 16 received normal injuries and were given first aid, two seriously injured were admitted in a local hospital. However, the condition of all injured was stable, officials added.
Two pilgrims died one each at holy cave and base camp of Baltal today due to cardiac arrest. They were identified at Laxmi Narayan Reddy from Andhra Pradesh, who breathed his last at holy cave and Ajay Chouhan of Noida, UP who died at Baltal base camp. With this, total 5 persons died during the ongoing yatra.
The weather in the holy cave area remained partially cloudy but dry during the entire day today, officials said.
A fresh batch of 5,124 pilgrims left the Bhagwati Nagar Base camp, here early this morning under tight security arrangements for the holy cave in a cavalcade of 226 vehicles, officials said. The yatris convoy was escorted with CRPF guard up to the respective base camps.
Officials said all the pilgrims have managed to reach the base camps of Nunwan-Pahalgam and Baltal -Sonamarg by this evening where from they will proceed to holy cave early tomorrow morning. There is a lot of festivity at both the base camps as thousands of pilgrims from all over country report there daily.
They said the rush of pilgrims is increasing at both the base camps as thousands of pilgrims from different parts of country are daily reporting at Jammu to leave for the pilgrimage of Shri Amarnathji and perform the darshan of naturally formed ice Lingam there.
The heavy rush of pilgrims as well as Sadhus wal also seen at registration counters at Jammu where hundreds of yatris are seen waiting in long queues for their enrolment. Some pilgrim buses without entering the Yatri Niwas here are going directly towards the twin base camps.
Officials said thousands of pilgrims are camping at Jammu and about 2500 had managed their entry at Bhagwati Nagar Yatri Niwas by this evening while hundreds were seen waiting in queue for security check up to leave for base camps tomorrow morning. The Government, besides the multi tier security has also made elaborate arrangements for the pilgrims.