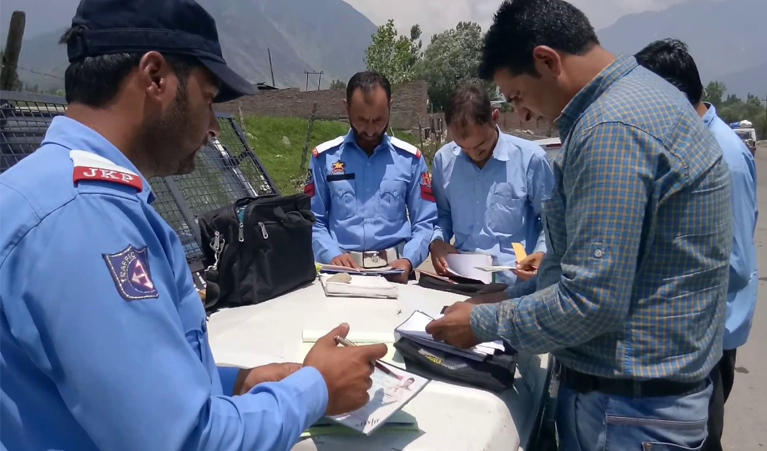 Mohinder Verma
JAMMU, Aug 24: Shocking it may sound but it is a fact that departmental enquiries ordered by the Traffic Police Headquarters following major tragic accidents in Kishtwar and on Mughal Road, which claimed 46 lives, have yet not been completed despite lapse of over one month. The dilly-dallying approach in this regard is notwithstanding the fact that factual reports are already in the possession of the Enquiry Officers.
On June 27, 2019, a Tempo Traveller carrying students of Kashmir Institute of Technology, Surankote met with an accident near Peer Ki Gali on Mughal Road resulting into death of 11 passengers and injuries to several others.
Similarly, on July 1, 2019, an extremely overloaded bus plunged into 350 feet deep gorge near Sirigwari in Kishtwar district leading to death of 35 persons and injuries to 16 others.
On the directions of Traffic Police Headquarters factual reports relating to both these accidents were sought from the concerned SSPs of Traffic Police. As far as Mughal Road accident is concerned, it was submitted by the concerned SSPs that Tempo Traveller was extremely overloaded and the DTIs/SOs concerned had failed to check the overloading, which amounts to gross carelessness and negligence towards their legitimate duties.
In view of this, a departmental enquiry into the matter was ordered by the Traffic Police Headquarters against Inspector Farooq Ahmed, DTI Pulwama-Shopian, Inspector Niaz Ahmed, DTI Mughal Road/Bufliaz and ASI Zulfqar Ahmad, the then SO (T) Surankote for their failure to conduct checking of the ill-fated overloaded vehicle.
“The enquiry shall be conducted by Tahir Sajad Bhat, Staff Officer to IGP Traffic J&K, who shall submit his findings within a fortnight for further course of action”, read the Order No.183 dated July 17, 2019 issued by Alok Kumar, Inspector General of Police Traffic J&K.
As far as Kishtwar accident is concerned, the factual report furnished by the SSP Traffic NHW Ramban revealed that mini-bus was extremely overloaded due to the failure of the concerned officer to check the menace. “This amounts to gross negligence, dereliction of duties and warrants disciplinary action”, the SSP mentioned in the factual report.
Accordingly, Traffic Police Headquarters on July 17, 2019 ordered departmental enquiry into the matter against Inspector Kesar Singh, DTI Kishtwar to be conducted by SSP Traffic City Jammu Joginder Singh within a period of 15 days positively.
Though both the Enquiry Officers were supposed to complete the proceedings relating to departmental enquiries within a period of 15 days from July 17, 2019 onwards (by August 1, 2019) yet they have not completed the assigned task despite lapse of over one month.
This can be gauged from the detailed affidavit filed by none else than the Inspector General of Police (Traffic) J&K Alok Kumar in compliance to the directions dated July 16, 2019 passed by the Division Bench of the State High Court in a Public Interest Litigation (PIL) titled Intakhab Ahmed Qazi Versus State of J&K and Others.
The affidavit dated August 19, 2019, the copy of which is available with EXCELSIOR, states: “In order to find out the lapse on the part of the Traffic Police officers/officials, a detailed factual report was sought from the subordinate units in whose area of responsibility, the ill-fated vehicles were plying on the days of incidents”.
“On receiving of the detailed factual reports of both the accidents, enquiries have been ordered by the Traffic Police Headquarters J&K on July 17, 2019, which are entrusted to Tahir Sajjad Bhatt, then SO to IGP Traffic and Joginder Singh, SSP Traffic City Jammu. These enquiries are under progress”, the affidavit further reads.
However, no justification has been given in the affidavit for not meeting the time-frame fixed for completion of departmental enquiries. “It is really a matter of serious concern that despite availability of the factual reports dilly-dallying approach is being adopted in completion of enquiries”, sources said, adding “prompt action in such cases is imperative so as to have deterrent effect”.
It is pertinent to mention here that Division Bench of the State High Court comprising Justice Dhiraj Singh Thakur and Justice Sindhu Sharma, while expressing deep concern over the ‘dance of death’ on the roads in the hilly areas, had framed several questions to be answered by the State respondents including IGP Traffic Police J&K.