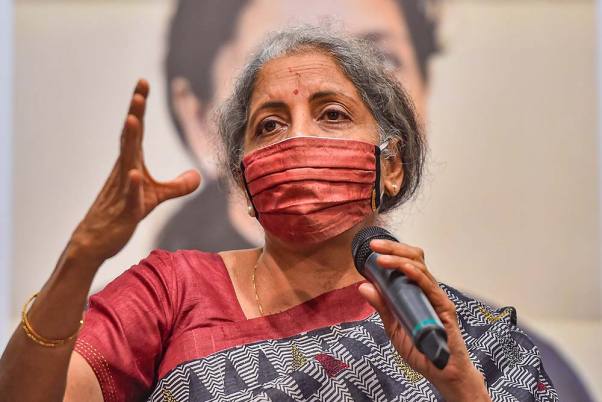 NEW YORK, Oct 17: Opportunities are galore in India for all investors and industry stakeholders with the current reset in the global supply chain and clear-headed and committed leadership in the country, Finance Minister Nirmala Sitharaman has told CEOs of top American companies.
Sitharaman arrived here on Friday after her visit to Washington DC where she participated in the annual meetings of the World Bank and the International Monetary Fund. Sitharaman and US Treasury Secretary Janet Yellen also co-chaired the eighth ministerial meeting of the India-USA Economic and Financial Partnership Dialogue in Washington.
“With the current reset in the global supply chain and clear-headed and committed leadership in India, I see opportunities galore in India for all investors and industry stakeholders,” Sitharaman said during her address to global business leaders and investors at a roundtable organised by industry chamber FICCI and the US-India Strategic Partnership Forum here on Saturday.
Startups in India have grown tremendously and many are now raising money through capital markets. This year itself, more than 16 of them will qualify as unicorns, she said.
India has fully leveraged the potential of digitisation even during the most challenging times, the finance minister said.
The role of technology in the financial sector is enabling pushing the frontier of financial inclusion and fintechs are playing a key role in this area, she said at the roundtable, the Finance Ministry tweeted.
Sitharaman also met Mastercard Executive Chairman Ajay Banga and Mastercard CEO Michael Miebach, FedEx Corporation President and Chief Operating Officer Raj Subramaniam, Citi CEO Jane Fraser and IBM Chairman and Chief Executive Officer Arvind Krishna, Executive vice president and head of Prudential Financial, Inc’s International Businesses Scott Sleyster and Legatum Chief Investment Officer Philip Vassiliou.
Sitharaman met Banga and Miebach in New York. “The initiatives and progress towards financial inclusion and digital transformation formed part of discussion,” the Finance Ministry tweeted.
Following his meeting with Sitharaman, Banga said India is on a “great pathway and trajectory” with its continuing reforms and he can see great momentum.
“I’m particularly impressed by the production linked incentives that have been put into place,” he said, adding that they can make a big difference to the way that labour intensive industries in India can develop.
“I’m very hopeful that it’s not just one reform but the series of reforms that are continuing can keep guiding India on the trajectory. I believe that there is a lot of opportunity for India to participate in supply chains and this can be very helpful over the next period of years to bring good jobs into India,” Banga said, asserting that he is “constructively optimistic” about what India is doing.
Miebach said he shares Banga’s optimism. Describing his discussion with Sitharaman as “very constructive”, he said “it further raises the optimism” and said MasterCard will continue to invest in India.
During Sitharaman’s interaction with FedEx CEO Subramaniam, “the recently launched initiative of National Infrastructure Master Plan #GatiShakti and India having 3rd largest start-up ecosystem & unicorn base formed part of discussion,” the Finance Ministry tweeted.
Subramaniam said FedEx business in India is growing strong. “We are very bullish on India. The very fact that we have a global air network puts us in a considerable position to be able to help move COVID-19 related material into India when it was needed.
We are looking forward, we are very bullish on where potential for India is, the fastest growing large economy and growing trade environment,” he said.
Citi’s commitment towards ‘Make In India’ and focus on digitisation and partnerships with fintechs towards digital transformation was discussed during the meeting between Sitharaman and Citi CEO Fraser, the finance ministry said in a tweet.
Fraser said Citi has a “very proud and very long history” in India. “We are delighted to see the strength of the recovery that’s happening on the ground there. Obviously there’s a lot of concerns around supply chain disruption at the moment” but it’s around the world.
“We are very positive about the opportunities for the country. We’re seeing a real pickup in cross border flows. India is going to be a beneficiary, not just from supply chain movement around the world” and it can be an important destination for many multinationals that will be looking to grow their operations globally.
She said the digitisation that India has done is “truly impressive” and “it will be one of the major hubs of digital trade and digital services in the world and a standard-bearer going forward.”
“Fraser speaks about the strength of India’s economic recovery and how India will increasingly become an important destination of investment for multinational corporations looking to grow their operations,” the finance ministry tweeted.
The minister discussed reforms towards the capital bond market, investor charter and other initiatives with Prudential COO and Executive Vice President Sleyster, the finance ministry said.
“The robust structural growth and continued interest of the company to invest in India formed part of the discussion” between Sitharaman and Legatum Chief Investment Officer Vassiliou, it said.
During her meeting with IBM CEO and Chairman Krishna, the tech giant’s “interest in India in the areas of hybrid cloud, automation, 5G, cybersecurity, data, and Artificial Intelligence (AI) formed part of the discussion”, the ministry tweeted. (PTI)