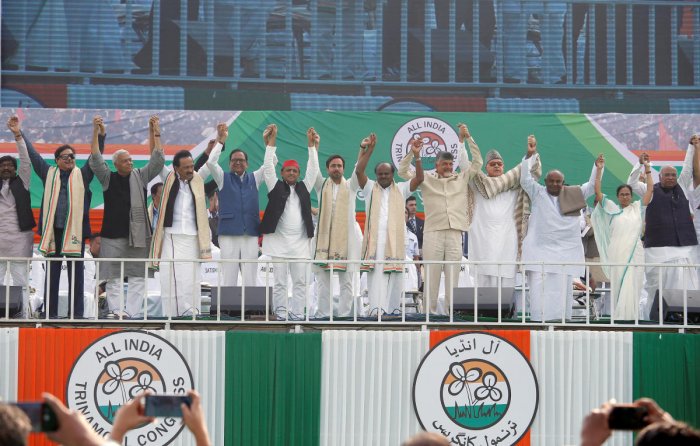 KOLKATA, Jan 19: Leaders from over a dozen opposition parties came together today, vowing at a mega rally here to put up a united fight in the coming Lok Sabha elections and oust Prime Minister Narendra Modi from power.
Over 20 leaders, including two from the Congress, attended the show of unity organised by Trinamool Congress leader and West Bengal Chief Minister Mamata Banerjee.
“The BJP Government has crossed its expiry date,” she said.
The leaders called for putting the differences between the parties aside, and said they can decide on issue of Prime Minister’s post after the elections.
Some suggested that the opposition should aim at putting up a joint candidate against the BJP nominee in every constituency.
They also decided to hold more joint rallies ahead of the elections, which are to be held by May. The next public meetings will be in New Delhi and Andhra Pradesh capital Amravati.
The two top Congress leaders, party president Rahul Gandhi and UPA chairperson Sonia Gandhi, skipped the Kolkata rally. But the party was represented by Mallikarjun Kharge and Abhishek Manu Singhvi.
Khare, who is leader of the party in the Lok Sabha, read a message from Sonia Gandhi wishing success to the rally.
H D Deve Gowda (Janata Dal-Secular), Sharad Pawar (Nationalist Congress Party) Akhilesh Yadav (Samajwadi Party), Farooq Abdullah (National Conference) and M K Stalin (DMK) were among the top leaders at the rally.
Delhi Chief Minister Arvind Kejriwal and his Karnataka counterpart and H D Kumaraswamy too attended.
Socialist leader Sharad Yadav, former Union Ministers Arun Shourie and Yashwant Sinha, and BJP rebel Shatrughan Sinha also shared the dais.
“The BJP Government has crossed its expiry date. We all have to fight together to ensure that they are defeated,” Banerjee, the last speaker, said.
“The issue of Prime Ministership won’t be a problem,” she added.
Bahujan Samaj Party supremo Mayawati didn’t come to Kolkata, but BSP general secretary Satish Chandra Mishra addressed the meeting and highlighted his party’s recently announced alliance with the SP in Uttar Pradesh.
“The entire country is echoing with the demand to oust the BJP. We have to come together to save the Constitution of Babasaheb Ambedkar. The SP-BSP alliance had been formed to defeat the BJP,” he said.
Echoing Mishra, SP president Akhilesh Yadav said many people had thought the SP and the BSP won’t be able to clinch an alliance.
“The BJP is now thinking how to win at least one seat in UP,” he said in an apparent reference to Modi’s Varanasi constituency.
“Those who used to say `Sabka Saath Sabka Vikas’ have turned one against the other by infusing poison in the country. We will fight together to save the country and the Constitution,” he said.
In an apparent hint at differences between the parties, senior Congress leader Mallikarjun Kharge recited a couplet, which suggested that even if their hearts don’t meet they should hold hands.
Karnataka Chief Minister H D Kumaraswamy said the BJP had tried to topple his government.
He said over the last 70 years the country has seen the emergence of strong regional parties that have played an important role to protect the interests of their own States.
Delhi Chief Ministers Arvind Kejriwal accused the BJP of creating divisions among the people in the name of religion, saying this had been “Pakistan’s dream”.(PTI)