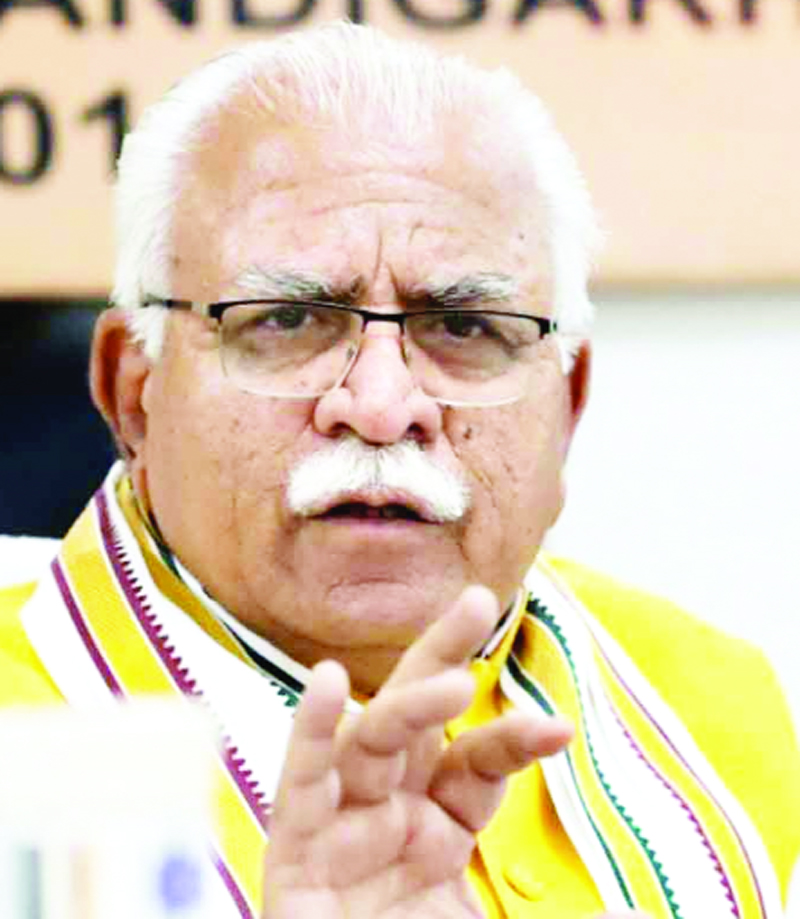 CHANDIGARH, Sept 21: Haryana Chief Minister Manohar Lal Khattar on Saturday said the Opposition is “divided” in the state and exuded confidence that the BJP will win over 75 of the total 90 seats in the next month’s assembly polls.
Assembly elections in Haryana will be held on October 21 and the counting of votes in the state will be taken up on October 24, according to the the Election Commission.
“The BJP is strong on all the 90 assembly seats in the state. Opposition political parties are divided and a stampede is taking place in these parties.We will cross the 75 plus seats in the state assembly, I am confident about it,” Khattar told the media here.
The BJP’s state unit has completed all preparations for the assembly polls, he said, adding that tickets will be allocated to those who follow the party’s ideology and have a “clean image”.
On the occasion, Congress leader Dura Ram and Indian National Lok Dal (INLD) stalwart Ram Pal Majra joined the BJP. Also present during the joining of these leaders was state BJP chief Subash Barala. Both Ram and Majra had remained MLAs of their parties when these were in power.
Khattar and Barala welcomed the leaders to the party fold and claimed that it will further strengthen the BJP in the state.
“Generally during the polls, the ruling party starts weakening, but at present, the BJP is further strengthening with joining of leaders of other political parties,” he said. The BJP will finalise allocation of tickets before the process of nomination begins for polls in Haryana, Khattar said, adding that the next government will be formed in the state before Diwali.
The priority of the “next BJP government” in the state will be security, health and education sector, he said.
The chief minister claimed that 4,300 villages in the state are getting round-the-clock power supply. In the next six months, all the 6,600 villages will get 24-hour power supply, he added.
He said the government would work for the upliftment of those families whose annual income is less than Rs 1.8 lakh.
On the contentious issue of Sutlej Yamuna Link (SYL) canal, he said Union Home Minister Amit Shah in the National Regional Council meet here on Friday told the participating states that he would soon convene a meeting of chief ministers of Haryana, Punjab, Rajasthan and Delhi to resolve the matter of water sharing.
He said that BJP’s relation with the Shiromani Akali Dal (SAD) is cordial in Haryana. On the fixing of number of seats for the SAD, he said the central leadership will take a call on the matter. Khattar said the BJP has not committed tickets to those who joined the party by leaving other political outfits.
He reiterated that Haryana will implement the National Register of Citizens (NRC) as it is “important in the national interest”. (PTI)