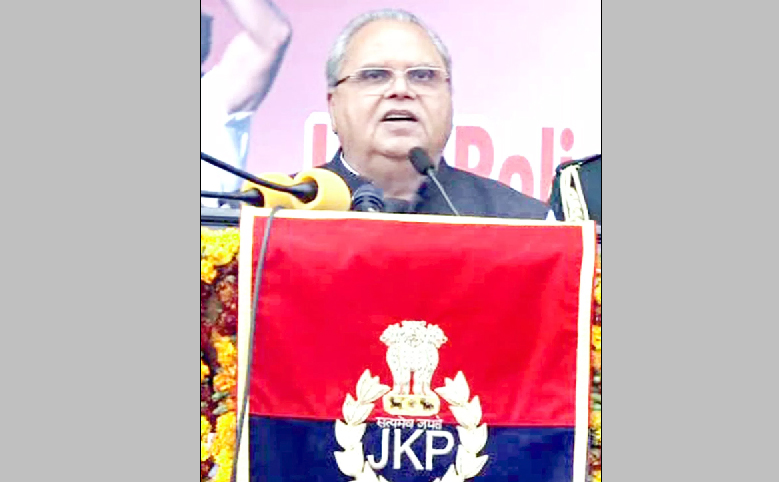 ‘JKP will get good news on Monday’
Excelsior Correspondent
JAMMU, Jan 10: Governor Satya Pal Malik said today that only youth have solution to the issues faced by Jammu and Kashmir and announced that Jammu and Kashmir Police will get some good news on Monday.
Addressing concluding function of 8th Police Martyrs Memorial T-20 cricket championship in Kathua, Malik said it was only youth which can solve the issues and problems of Jammu and Kashmir.
“The youth of the State had nothing to do after 6 pm. I realized this. Now, I have asked the administration to construct play grounds in the districts and other places. Very soon, we hope to host Indian Premier League (IPL) matches in Jammu and Srinagar,” he said, pinning lot of hopes on the youth.
Click here to watch video
Lauding Jammu and Kashmir Police for successful conduct of Panchayat and Municipal elections in Jammu and Kashmir, the Governor said police will get a good news on the upcoming Monday.
Though Malik didn’t drop any hint, speculations were rife that Jammu and Kashmir Police could get much awaited hardship allowance on Monday when the State Administrative Council (SAC) is scheduled to meet under the chairmanship of the Governor.
Jammu and Kashmir Police had, for the past quite some time, been demanding hardship allowance in view of its working under extreme tough circumstances in the militancy-infested State. Sources said the proposal for hardship allowance was virtually through and the SAC could give its nod to the proposal on Monday.
“Earlier, there used to be 70 to 80 killings during the elections, In just one by-poll of Srinagar Lok Sabha constituency, nine people were killed,” Malik recalled and lauded the role of Jammu and Kashmir Police in complete peaceful conduct of Municipal and Panchayat polls in the State from October to December last year.
Malik also lauded the sacrifices made by martyrs for integrity and sovereignty of the nation. He said the role of J&K Police in maintenance of peace has been hailed by one and all.
Referring to the welfare measures taken by the Governor’s administration, he said that welfare of next of kin of the martyrs will always be the priority of the Government.
He complimented Kathua Police and Shaheed Welfare Committee for their efforts in organizing T-20 cricket championship.
He distributed trophies and prizes among the winner and runner up teams and gifts among the next of kin of martyrs.
Speaking on the occasion, Director General of Police (DGP), Dilbag Singh said that J&K Police has been fighting terrorism and during the fight more than 1600 police personnel of the force have attained martyrdom for security and sovereignty of the nation.
He said that with the generous support of the Central and State Governments, a number of welfare measures have been taken during the Governor’s administration.
The DGP thanked the Governer for addressing all the issues of police personnel on priority. He said that enhancement in ex-gratia was a great effort to assist the families of police martyrs, and increase in remuneration of SPOs has gone a long way in boosting their morale. He hoped that other issues of the police force will be addressed favourably.