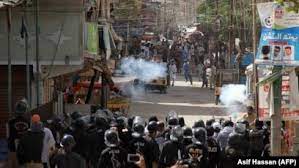 Islamabad, Jan 27: Pakistan’s Muttahida Qaumi Movement-Pakistan (MQM-P) has announced to observe Thursday as ‘Day of Mourning’ after one person died during baton-charge by the Karachi police at protesters on January 26.
According to Geo News, one person lost his life, while several members of the MQM-P, including women, were left injured after Karachi police baton-charged and tear-gassed them outside the Chief Minister’s House during a protest at the city’s Shahrah-e-Faisal.
They were protesting against Local Government Law passed by the Sindh Assembly.
Later, MQM-P’s parliamentary leader said, “We will register a first information report (FIR) under a section of terrorism against Chief Minister Sindh Murad Ali Shah for the murder of our worker.
“This was not the first day of our protests [against the PPP-led provincial government] but just the beginning.”
He further said the Thursday’s protest has been changed to “day of mourning” from the earlier announced ‘Black Day’ due to the death of the party worker.
(UNI)