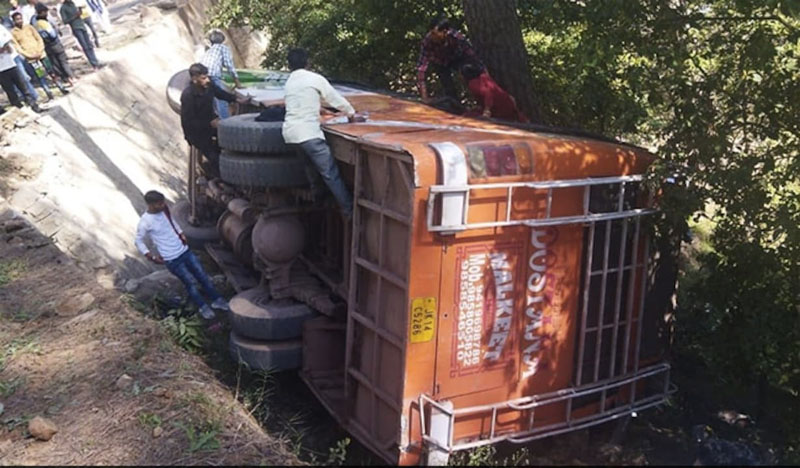 Excelsior Correspondent
UDHAMPUR, Oct 3: One person died and 67 others were injured when a heavily overloaded passenger bus rolled down from the road near Mansar Morh, here this morning.
The passenger bus, bearing registration number JK14C-5286, was on its way from Mongri to Udhampur when it went out of control and met with the accident around 9.45 am.
A police team, led by SHO Udhampur and locals rushed to the spot and shifted injured persons to District Hospital Udhampur where doctors declared one of them as brought dead. The deceased was identified as Jamal Din (58), son of Misroo, resident of Nalli Nikka.
Four of the injured, all females, were referred to GMC Hospital Jammu in view of their serious condition and for advanced treatment. They were identified as Neelam Kumari (29) wife of Shailender Kumar of Kainth Gali, Shakshi Thakur (20), wife of Jai Singh of Khour Gali, Makhana Devi (17), daughter of Govind Singh of Pathi and Pushpa Devi (60), wife of Krishan Lal of Malli.
The 42- seater bus was carrying 68 passengers, mostly students. According to the eyewitness, driver could not control the heavily overloaded bus while negotiating a curve with the result accident took place. Reports further said that insurance of the bus was also not renewed.
Police has registered a case in this connection at Police Station Udhampur.