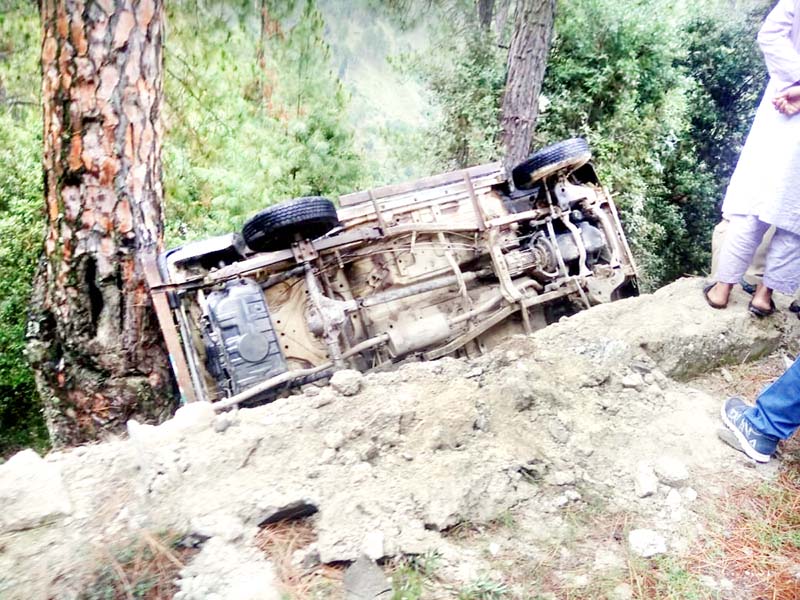 POONCH, July 18: One person was killed and at least eleven others were injured, four of them critically, when a load carrier met with an accident in Mendhar area of Poonch district on Thursday morning.
Reports said the vehicle (Tata mobile No. JKO2AH/ 0652) ) carrying villagers to Sakhi Maidan Mela, met with accident at Salotari near Uchhad in Mendhar, resulting into the death of one person identified as Syed Mohammad, son of Mohammad Bashir, resident of Dharadullian in Poonch and injuries to eleven persons. The injured were shifted to Sub District Hospital, Mendhar, reports said.

Click here to watch video
Soon after the accident, BSF jawans from nearby 168 Battalion, road opening party of 39RR as well and locals reached the spot and evacuated the injured to the hospital.
Confirming the death to one person, SDPO Medhar, Neeraj Padiyar said that a case has been registered and investigations taken up with regard to the incident.
BMO Mendhar, Dr Parvaiz Ahmed Khan said that eleven persons were admitted in the Sub District Hospital Mendhar and the condition of four was serious. They were referred to District Hospital, Rajouri and from there they were shifted to Govt Medical College Hospital, Jammu.
The injured have been identified as Altaf Hussain, son of Manzoor Hussain; Shoukat Ali, son of Alam Hussain; Sharafat Ali, son of Shoukat Ali; Mohd Javeer, son of Mohd Lal; Mohd Afraz, son of Manzoor Hussain; Abdul Ghani, son of Sahib Din; Abdul Aziz, son of Ali Asgar, Shoiab Ali, son of Abdul Aziz: Mohd Sageer, son of Talib Hussain; Ghulam Nabi, son of Mohd Ishaq-all residents of Salani and Maqsood Ahmed, son of Kala, resident of Magnad Poonch.

Respect given by Modi Govt to Gujjars unprecedented: Arshad