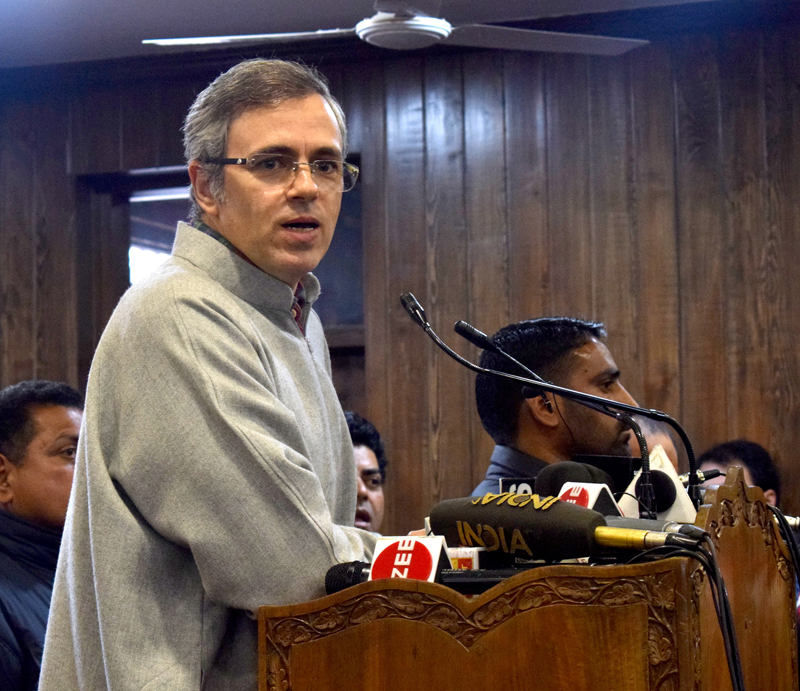 Fayaz Bukhari
SRINAGAR, Mar 7:Former Chief Minister Omar Abdullah today said creation of third front in Kashmir is a ploy by those, who don’t want strong united voice in Kashmir.
Omar, while addressing party workers at Nawai Subh here today, said that Kashmir has been turned into a laboratory where experiments are being conducted. “Kashmir has seemingly been converted into a laboratory. Every second day some new experiment is being played out. Dividing the mandate of people by propping up so called third fronts in the Valley has always been on the cards of those forces who don’t want Kashmiris to have a strong united voice”, he said.
The NC vice president said that censuring of Jamat-e-Islami has not helped in the past and will not help in future as well. “The recent arrest spree of JeI cadre and banning of the organization is yet another example of the ineptitude that the GoI is beset with. Censuring the group hasn’t helped earlier and wouldn’t help now. When I was heading the State Government, JeI was there and the situation was by and large peaceful despite having a rough year of 2010. No sheer political shenanigans, conspiracies will prove beneficial in keeping Kashmir with India. It is only by winning hearts of Kashmiris that the idea of the India can be realized”, he said.

Click here to watch video
Omar said that the speech of Prime Minister Narendra Modi in Rajasthan denouncing violence against Kashmiris has seen no realization on ground saying that the targeted violence against Kashmiris is not seeing an end in absence of a full throated condemnation from BJP leadership.
“The recent statement wherein Prime Minister had flayed the violence against Kashmiris has no effect on the ground. Why is it so that the affirmations of the Prime Minster haven’t seen any implementation on the ground? The relentless intimidation of Kashmiri businessmen, students across the country revealed that the affirmation of the Prime Minister was a mere ‘Jhumla’,” he said.
He said that the BJP leadership should come clean on targeting of Kashmiris. “The central leadership of the BJP should come clean on the incident of targeted intimidation against Kashmiris in Lucknow. Why BJP led Central Government and other State Governments have not come out strongly against the relentless targeted attacks on Kashmiris? ” asked Omar.
“Intimidating Kashmiri by one way or other will inadvertently push Kashmir to wall and impede the efforts of peace process in the State. The recent brutal attack on two Kashmiri dry fruit vendors in Lucknow, UP is a case in point. Such incidents have gained currency in the absence of any strong action by the Central Government against the perpetrators. Those who were attacked, like any other citizen, were honestly earning their livelihood. Unfortunately the same is being denied to them. If the same person throws stones after this episode then who is responsible for making them do it. What was their fault? The assaulter and their ilk are doing harm to the very idea of India,” the former Chief Minister said.
Omar said that the State’s accession with the Union of India was not just limited to land only. “It is people also that acceded to the Union of India. The people of Kashmir also need to be embraced. This unfortunately is not happening. On one hand, people at the helm of affairs in New Delhi say that Kashmir is their ‘Atoot Ang’ but when it comes to practicality, this theory finds no takers on ground”, he said.
The NC vice president maintained that the Constitution of India gives equal protection to everyone irrespective of region or religion and questioned the denial of these rights to Kashmiris putting up across many parts of the country. “We as a party are asking for our rights within the ambit of constitution, the constitution which is all inclusive. What should we say to people who are being denied the rights enshrined in Constitution? It’s the BJP and its leadership which needs to answer,” he said.
Omar said that Kashmiris are being targeted economically as well. “Not allowing 800 Apple laden trucks to reach other parts of the country is another step aimed at crushing the economy of Kashmir. After essential services, it is the prime duty of the Government to help in the safe transit of the fruit laden trucks to reach their destinations. Being a perishable item, they should have ensured speedy transit of fruit trucks. The move is yet another glaring example of the imprudent policy to crush the very economy of Kashmir,” he said.
“The orchardists keep their eye on the annual produce to pay for their debts due to banks and take care of their other household chores. This move will inadvertently affect the backbone of our fragile economy”, he said.
On the occasion, former MLA Beerwah and senior PDP leader Dr Mohammad Shafi Wani along with his supporters joined National Conference. “I welcome Shafi sahib into the party fold. I am sure that his coming into NC will lend a hand to our efforts to ensure all round development in Beerwah and give State a strong mandated Government,” Omar said.