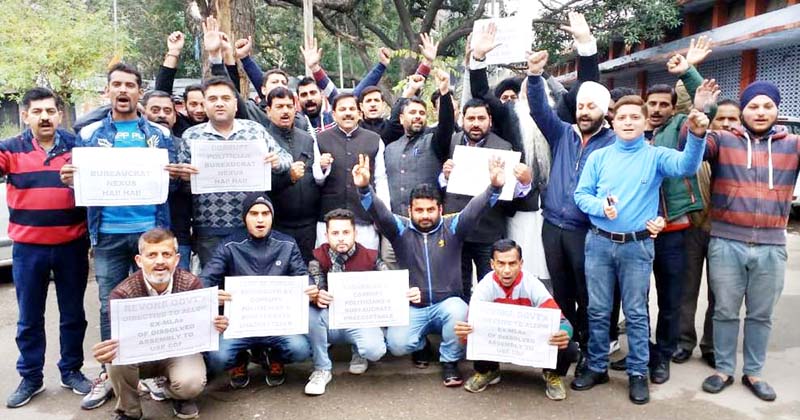 Excelsior Correspondent
JAMMU, Jan 6: Agitated over the new directive of the State Govt allowing ex-MLAs to utilize the Constituency Development Fund (CDF), a large number of Panthers Party led by party chairman Harsh Dev Singh and other leaders staged a protest demonstration at Exhibition Ground here today.
While raising slogans, the angry protesters accused the corrupt politician-bureaucrat nexus of plundering the tax payers money and demanded immediate revocation of the order.
Later, addressing the media, Harsh Dev regretted that such a freakish order provided the most glaring example of loot and plunder of public exchequer by corrupt politicians in connivance with unscrupulous bureaucrats. “It was unprecedented in the 70 year history of the country that members of dissolved Assembly were being granted permission to use the CDF grants despite the same having lapsed with the dissolution of House. The situation is quite appalling where the politicians and top bureaucrats had become partners in crime of loot, while the administrative machinery below was made to remain as mere adjunct in the system,” he said.
Expressing shock over the most unconventional directive which showcased the rampant corruption in the State, Harsh Dev Singh questioned the issuance of the uncanny order on CDF issued 45 days after the dissolution of Assembly.”Where are the vigilante organizations? Why don’t they take suo-motto cognizance of such a brazen irregularity? By allowing the ex-MLAs to use CDF, the State coffers would be thrown open to be plundered by the ‘corrupts’ and the ‘unscrupulous’. All laws, norms and procedures were overtly flouted during the last 4 years but the recent order had said it all and broken all records of improbity and impropriety”, Harsh Dev said.
He maintained that Panthers Party shall not tolerate further siphoning of the public money and cautioned the Govt to revoke the CDF use order without delay as it brazenly violated financial code and SOPs. “It is State’s biggest ever CDF scam which should be brought under the scanner of CBI or NIA probe. We would not only agitate the issue vigorously in the streets and outside the Civil Secretariat but approach the court as well seeking exemplary punishment for all those involved in contemplating and issuance of such order for vested interests”, Singh said.
YP Kundal, Gagan Partap Singh, Parshotam Parihar, Rajiv Mahajan and KK Sharma also spoke on the occasion.

Sharma honoured for his contribution in literature