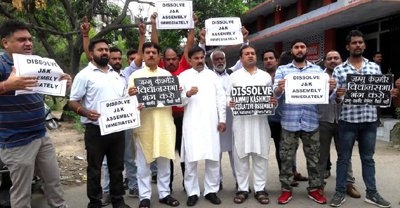 Excelsior Correspondent
JAMMU, June 27: Flaying the Govt of India for using coercion to keep J&K Assembly in suspended animation following the collapse of unholy BJP-PDP combine and imposition of Governor rule, National Panthers Party  activists led by party chairman  Harsh Dev Singh held  a protest demonstration at Exhibition Ground Jammu here today.
The protesters urged upon the Governor to immediately dissolve the State Assembly and pave way for the fresh elections in the larger interest of the democracy.
Talking to media persons on the occasion, Harsh Dev said that following the breakdown of BJP-PDP alliance the Governor rule had been imposed in the State on June 19. He said that all the major political parties including the Congress, BJP, PDP and National Conference had conveyed that they would not explore the possibility of forming the Government in the State due to lack of numerical strength. No plausible combination of political parties or alliance was coming forth to claim the magic figure of 44 required for absolute majority, he said.
The Governor should act in conformity with the Parliamentary precedents and the mandate of constitution by immediately recommending the dissolution of the Assembly to pave way for the fresh elections”, urged Harsh Dev.
NPP leader said that the BJP had earned the dubious notoriety of ‘sealing the deals’ to forge dirty alliances in other States by offering enticements and other unethical means. He said that in the situation of the State Assembly being kept under suspended animation, the rumours of mal-practice of ‘horse trading’ were agog and besides other corrupt practices could not be ruled out unless it was dissolved.
Dubbing the political impasse in J&K as irrational, he maintained that suspension of the State Assembly on the behest of GoI seemed to be mere contemplation for exploring undemocratic opportunities for its political interests. He further reckoned that in the wake of the political uncertainty, the grant of all perks, amenities, emoluments and CDF to members of suspended Assembly, whose rights and privileges stood suspended during the period, defied all logic and rationale.
Ex-MLA Yash Pal Kundal, Gagan Partap Singh and  Rajesh Gondhi also spoke on the occasion.